LONDON • The British government must submit a different proposition to Parliament to the one it lost last week if it wants to hold another vote on its Brexit plans, the Parliament's Speaker, Mr John Bercow, said yesterday.

Mr Bercow, the ultimate arbiter of whether the government can ask Parliament again to pass Prime Minister Theresa May's deal to leave the European Union, said ministers could not submit the same proposition again.

"This is my conclusion: If the government wishes to bring forward a new proposition that is neither the same, nor substantially the same as that disposed of by the House on the 12th of March, this would be entirely in order," he said. "What the government cannot legitimately do is to resubmit to the House (of Commons) the same proposition or substantially the same proposition as that of last week which was rejected by 149 votes," he added.

Mrs May's blueprint, an attempt to retain close trading and security ties with the EU while leaving the bloc's formal political structures, was defeated by 230 votes in Parliament on Jan 15, and again by 149 votes on March 12.

Mrs May had warned lawmakers that unless they approve her Brexit divorce pact after two crushing defeats, Britain's exit from the EU could face a long delay, an outcome which many Brexiteers fear would mean Britain may never leave.

After 21/2 years of negotiations with the EU, the final outcome remains uncertain - with options including a long delay, exiting with Mrs May's deal, a disorderly exit without a deal or even another EU membership referendum.

Mrs May is scrambling to rally support ahead of a summit of EU heads of government on Thursday and Friday where she has warned that she will ask for a long Brexit delay unless Parliament ratifies the deal she struck last November. 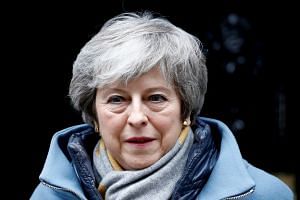 Trump slams handling of Brexit by British PM Theresa May

Cracks appeared in the ranks of rebel Conservative lawmakers opposed to Mrs May's Brexit plans yesterday but she has yet to win over enough hardliners to get her EU departure deal through Parliament.

One of the most influential Brexit-backing lawmakers in Mrs May's party, Mr Jacob Rees-Mogg, gave the strongest hint to date that the rebels might back her, saying that a bad exit deal was better than staying in the EU.

He said his dream option would be a no-deal exit on March 29, the official departure date, but that he felt that Mrs May would seek to prevent a no-deal.

Mrs May's deal has in the past few days been publicly backed by several prominent pro-Brexit Conservative politicians and campaigners. However, other senior Brexiteers have said they are holding out against the Prime Minister.

Mrs May must win over at least 75 MPs - dozens of rebels in her own Conservative Party, the Northern Irish Democratic Unionist Party (DUP), which props up her minority government, and some opposition Labour MPs to get a deal approved.

The biggest issue for the Brexiteers and the DUP is the so-called Northern Irish border backstop, an insurance policy aimed at avoiding post-Brexit controls on the United Kingdom's border with EU-member Ireland.

Mrs May's Finance Minister Philip Hammond held talks with the DUP last Friday but said the government did not yet have support it needed.

Many Brexiteers and the DUP are concerned the backstop will trap Britain in the EU's orbit indefinitely, and have sought guarantees that it will not.

For their part, almost all opposition lawmakers and some pro-EU Conservatives see the deal as leaving Britain worse off by keeping it with one foot in and one foot out of the EU, subject to various bloc rules without a say in making them.

A version of this article appeared in the print edition of The Straits Times on March 19, 2019, with the headline 'May cannot submit same Brexit deal to another vote'. Subscribe
Topics:
More
Whatsapp Linkedin FB Messenger Telegram Reddit WeChat Pinterest Print Copy permalink