The championships, a qualifier for the 2020 Tokyo Paralympics, had been scheduled for Kuching between July 29 and Aug 4. The IPC said a new venue would be sought for the same dates, although there might have to be some flexibility in the light of circumstances.

"All World Championships must be open to all eligible athletes and nations to compete safely and free from discrimination," said IPC president Andrew Parsons in a statement after a meeting of the IPC governing board in London.

"When a host country excludes athletes from a particular nation, for political reasons, then we have absolutely no alternative but to look for a new Championships host."

He said that when Malaysia was awarded the championships in 2017, the IPC had been given assurances that all eligible athletes and countries would be allowed to participate with their safety assured.

"Since then, there has been a change of political leadership and the new Malaysian government has different ideas," said Mr Parsons.

Malaysia, a majority-Muslim country that does not maintain diplomatic relations with Israel, announced this month that it would bar Israelis from any event held in the South-east Asia nation. 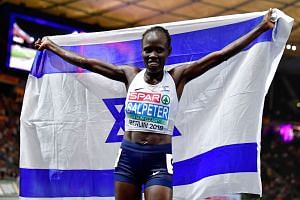 Israel had condemned the ban as "shameful" and said the decision was inspired by Prime Minister Mahathir Mohamad's "rabid anti-Semitism".

"Malaysia stands firmly with our decision on the ground of humanity and compassion for the Palestinian plight. We will not compromise," he said in a statement issued to the media yesterday.

He added that if hosting an international sporting event was more important than standing up for Palestinians, that meant Malaysia had truly lost its moral compass.