Jenna Puurunen is a bubbly 12-year-old with a passion for pop music, and gets upset when she falls ill and misses school. She also has cerebral palsy, has trouble controlling the muscles in her body, and needs a wheelchair.

She also has to speak slowly and sometimes needs to rely on an assistive tablet to communicate but that has not stopped her from taking part in games and classes alongside other children in a regular school for the past six years.

In Singapore, Jenna would likely have been placed in a special education school. But in Vantaa, a city of more than 223,000 people in southern Finland, such schools were closed six years ago and resources redistributed to mainstream schools to take in students like Jenna.

Amid calls in recent years for Singapore society to be more inclusive, The Sunday Times made a trip to Finland in partnership with The Lien Foundation in August to look at how schools there have made this a reality.

Finland's journey of inclusion started in the 1990s. It passed legislation in 1997 which revamped special education by allowing students with the most significant disabilities to join mainstream education.

More than 95 per cent of students with special needs, including those with severe conditions such as cerebral palsy, are in publicly-funded regular schools, also known as comprehensive schools, which take in students from the ages of seven to 16. The number of students in special schools have fallen from 8,300 in 2007 to 4,400 last year.

Dr Markku Jahnukainen, a professor in inclusive and special education at the University of Helsinki, said the Finnish system aims to provide equal opportunities for all children through three ways.

At least 12 per cent receive general support, while another 10 per cent get intensified support, such as pull-out sessions, and another 8 per cent of pupils receive special, or more targeted help, like personal education plans.

Students do not pay more for such help in education, and other provisions like healthcare in the country are free. Finland's top earners pay taxes of more than 50 per cent, compared with 22 per cent in Singapore.

It may sound like a costly effort, but Finland, which has a population of 5.5 million and is one of the top performers in global education tables, has been cited as one of the most cost-efficient countries in terms of student outcomes, relative to how much is spent educating them.

Academics and teachers in Finland said that everyone shares a strong belief in raising children to be not just book-smart but also open-minded and accepting of others.

In Helsinki, Hiidenkivi Comprehensive School scrapped separate special needs classes two to three years ago. About 11 per cent of its 800 students have learning problems such as difficulties with speaking and are put into mainstream classes. Special education teachers support their mainstream colleagues during lessons.

Meanwhile, Merilahti Comprehensive School sorts students who need extra support into special classes in the younger grades, before transferring them to mainstream classes when they are older.

Special education teacher Merja Kauppinen said the goal is to integrate some pupils into regular classes for some subjects. "If it doesn't work, they will come back to my class."

Ms Leena Kolho-Venalainen, principal of Jokiniemi School, where Jenna studies, said it is a reflection of the "normal world".

The school has 800 students, 140 of whom have special needs and mostly attend regular classes. Those with more severe needs - 43 of them - have separate classes in groups of six. Each of them has a special education teacher or a medically-trained assistant who follows them to their classes.

HOW WE DO SCHOOL FINLAND Ep 2: Teaching Twogether

Special classes are placed alongside regular classes and students have activities like art together.

Are parents of mainstream children afraid that they would be held back or will pick up "bad habits" from those with special needs?

Hardly, Ms Kolho-Venalainen added. A key reason is because teachers in Finland, most of whom hold master's degrees, are highly respected and trusted by society. They are given autonomy to decide how best to teach their students.

Dr Jahnukainen said entry into their courses is highly competitive. At the University of Helsinki's faculty of educational sciences, more than 1,000 people recently applied for just 30 spots to earn a master's degree in special education.

HOW WE DO SCHOOL FINLAND EP 3: A School Designed For All

Ms Riia Palmqvist, counsellor of education at the Finnish National Agency for Education, the equivalent of Singapore's Ministry of Education, said that by law, special classes are kept small - one teacher to a group of six to eight students with severe learning problems. "Of course that would cost more than a class with one teacher and 30 children... but our idea is that those children who can make it in a mainstream classroom should be there with all the other children and learning problems should not exclude them from their peer group."

Being part of regular schools also benefits students later in life as they learn to be part of a community.

Ms Noora Amalia Hakala is adjusting to life on her own in an apartment in Tampere, a city in the south of Finland, learning to buy groceries and clean the new home that she moved into in August. The 28-year-old, who has Down syndrome, went to regular school all her life and took subjects like geography with her mainstream peers. 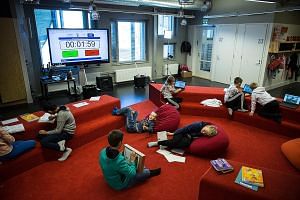 Her mother, Dr Katariina Hakala, a researcher in disabilities, said: "Students were always welcoming and they even competed for her to be part of their group."

"Noora is quite independent in many ways. She doesn't need much support except in governing her finances or paying bills," she added.

But there are challenges beyond school, like limited job options for those with disabilities and low pay for the work they take on.

So organisations like Oma Polku step in to equip these young people with life and job skills so that they can be integrated into society.

Ms Hakala joined Oma Polku, which is Finnish for "own path", in 2014, after brief stints as a cleaner and office assistant.

HOW WE DO SCHOOL FINLAND EP 4: Out of School, Into the World

At the non-profit organisation, she earns an allowance for helping with media projects like animation movies, art and painting, and also gets a disability pension of €700 to €800 a month.

Experts say Finland has improved tremendously in terms of inclusivity over the decades, and including children with special needs in regular schools is the way to go.

Ms Maria Tauriainen, a special education planner who oversees 17 schools in Helsinki, said: "We don't know what kind of academic skills we need in 20 years. But I think that if children get along with different kinds of people, they will succeed, because they are more open-minded when they grow up.

"The most important thing is to teach children diversity, and to learn to accept different kind of learners and people."

A version of this article appeared in the print edition of The Sunday Times on October 28, 2018, with the headline 'Learning for all, the Finnish way'. Subscribe
Topics:
More
Whatsapp Linkedin FB Messenger Telegram Reddit WeChat Pinterest Print Purchase Article Copy permalink