VIENNA (DPA) - Austrian conservative leader Sebastian Kurz and his People's Party won the Austrian election with 37.2 per cent of the vote, while the far-right Freedom Party (FPOe) took a beating following a corruption scandal, a first projection showed on Sunday (Sept 29).

The FPOe's dismal showing and Sunday's boost for the Greens opened up the possibility of a majority coalition between the conservatives and the environmentalists.

Kurz had cancelled his coalition with the far right and called the snap election in May, after a video surfaced that showed FPOe leader Heinz-Christian Strache mulling infrastructure and media deals with a woman posing as a wealthy Russian donor.

The People's Party (OeVP) gained 5.7 percentage points compared to the previous parliamentary vote in 2017, according to the projection that was based on 56 per cent of counted ballots and has an error margin of 1.6 per cent.

The Freedom Party (FPOe), the OeVP's former junior coalition partner, plummeted 10 points to 16 per cent of the votes.

The FPOe no longer aims to form another coalition with the conservatives, senior FPOe figure Harald Vilimsky said Sunday evening.

"We did not receive a clear mandate to continue the coalition," the EU parliamentarian said.

While the originators of the footage shot on Spain's Ibiza island remain unknown, Strache stepped down as vice chancellor and FPOe chief, and is now under investigation for possible abuse of power.

Three days before the elections, prosecutors announced that they also suspect Strache of having defrauded his own party, despite his monthly €10,000 (S$15,117) expenses account.

Banking on tax cuts and his anti-immigration policies, Kurz emerged as the winner from the video scandal that not only brought down his government, it also cost him his job as chancellor in a no-confidence vote in May.

In an election season that was dominated by climate issues and debates about shady party funding strategies, the environmentalist Greens are set to return to parliament with 14.3 per cent of the votes, after having lost all their seats in 2017. 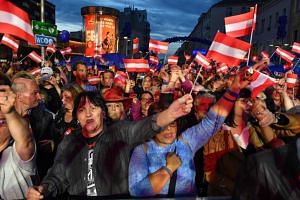 Although Kurz's tough migration and pro-business policies and the Green's leftist visions do not overlap a lot, a coalition between the two parties is not impossible. Two Austrian provinces, Tyrol and Vorarlberg, are ruled by conservative-green regional governments.

The Neos, who ran on a platform of clean politics, gained 2.2 points to reach 7.5 per cent on Sunday.

The Social Democrats (SPOe) were unable to profit from the FPOe scandals. The party is projected to collect 21.8 per cent of the vote, its weakest result in a national election.

Among Austria's 8.9 million inhabitants, 6.4 million were eligible to elect the 183 members of the National Council, the lower house of parliament.

Until a new government is formed, interim Chancellor Brigitte Bierlein and her expert Cabinet of senior bureaucrats will remain in office.