MOSCOW (REUTERS) - The Kremlin said on Tuesday (Aug 25) it saw no need for now to investigate circumstances leading up to opposition politician Alexei Navalny's grave illness, and that a German clinic's initial diagnosis of poisoning was not yet conclusive.

Chancellor Angela Merkel on Monday called for an investigation and for Russia to hold the perpetrators accountable after German doctors found indications of a toxic substance in his body.

Navalny, an outspoken opponent of President Vladimir Putin, was airlifted to Germany for treatment on Saturday after collapsing on a plane while flying back to Moscow from Siberia.

But Kremlin spokesman Dmitry Peskov said the German clinic had not conclusively identified the substance behind Navalny's illness and that it was unclear why German doctors were"rushing" to use the word poisoning.

"There must be a reason for an investigation. For the moment, all you and I see is that the patient is in a coma,"Peskov told reporters.

Any suggestions, he added, that Putin was somehow involved in Navalny's illness were untrue and "hot air" that the Kremlin would not take seriously.

He said that if poisoning was definitively established as the cause, "then of course, this will be a reason for an investigation."

In response to the Kremlin's comments, Navalny's spokeswoman Kira Yarmysh said it was "obvious the crime wouldn't be investigated properly and the criminal found."

The speaker of Russia's lower house of parliament, a Putin ally, said one of its committees would launch a probe to determine whether foreign forces had played a hand in Navalny's illness in order to fuel tensions in Russia.

Demands from abroad for an independent probe are intensifying. 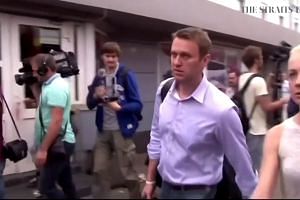 German doctors treating Navalny at a Berlin hospital said on Monday that medical examinations indicated poisoning with some kind of cholinesterase inhibitor, although the specific substance is not yet known.

Russian health officials contradicted that diagnosis, saying Navalny had tested negative for cholinesterase inhibitors when he was hospitalised in Omsk last week.

Peskov said doctors at the Omsk hospital had battled for three days to treat Navalny and had possibly saved his life.

"We don't understand why our German colleagues are rushing with the word poisoning," he said.

Navalny has been a thorn in the Kremlin's side for more than a decade, exposing what he says is high-level graft and mobilising protests. He has been repeatedly detained for organising public meetings and sued over corruption investigations, and was barred from running in the 2018 presidential election.

Germany said on Monday that Navalny was being guarded due to concerns for his safety.

Navalny's wife was filmed entering the hospital on Tuesday but declined to speak to journalists.