MOSCOW (REUTERS) - Jailed Russian opposition leader Alexei Navalny has filed an official complaint saying he was poisoned while in custody on Sunday, his lawyer Vadim Kobzev said on social media.

The critic of the Kremlin was rushed to hospital with what his spokeswoman said was "severe swelling of the face and skin redness".

He was discharged and taken back into custody a day later.

Navalny had contacted a regional department of Russia's Investigative Committee "with a statement about the crime committed in connection with his poisoning," Kobzev said on Thursday (Aug 1).

His legal team was asking for a forensic examination to identify the agent used, and for checks on the video surveillance in Navalny's detention room, the lawyer added.

The Kremlin has not commented on the incident.

A Russian state hospital has said Navalny tested negative for poison, but his personal doctor said the findings were inconclusive. 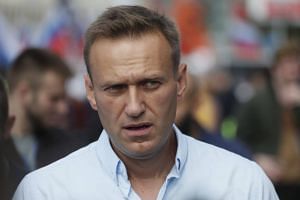 Jailed Russian opposition leader Navalny may have been poisoned; discharged from hospital

Navalny was jailed for 30 days last week for urging people to take part in unauthorised protests on Saturday.

Police detained more than 1,000 people at the rally in Moscow in one of the biggest crackdowns of recent years on an increasingly defiant opposition decrying President Vladimir Putin's tight grip on power.

Russian police have so far identified 10 key suspects involved in what they call mass civil unrest and have already made five arrests, investigators said on Thursday.

The Investigative Committee said ahead of another opposition protest planned this Saturday that police planned to arrest more people suspected of involvement in unrest.

Charges of organising mass civil unrest in Russia carry a penalty of up to 15 years in jail.