Car salesman Tomi and millions like him represent the small-town Hungary Orban has grown so adept at cultivating.

"I couldn't do otherwise. I followed my heart."

The apparently unshakeable support Orban has won from such voters over the course of his career has confirmed his dominance of Hungarian politics.

The government's relentless rhetoric against immigration was derided by critics as exaggerated and misleading. But it struck a chord amongst Fidesz's base.

"I'm not racist but everyone should stay in their own country! I don't like the left's policy of 'Everyone welcome'," 25-year-old logistics administrator Szabolcs told AFP. 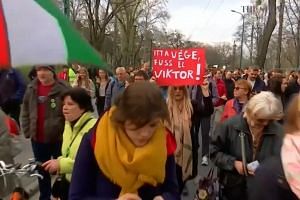 Construction supplies merchant Janos Kevei, 41, sums up the local contentment with the status quo and the buoyant economy.

"Business is good, I have contacts everywhere and I don't care about civil rights. Why change something that's working so well?"

But not all Hungarians were so sanguine about what the next four years have in store.

Elisabeth Katalin Grabow, a 33-year-old Hungarian-German journalist, says she and her Ghanaian boyfriend have experienced racist abuse. She fears such attitudes may now become more explicit.

"I'm honestly afraid for my boyfriend's safety and even worse: How could we have children in this country, where hate and racism are now officially part of the governing party's policy?" she asks.

Standing outside the arts faculty of central Budapest's Eotvos Lorand university, its EU flag fluttering in the spring breeze, PhD history student Edina, 29, said she is "outraged and desperate".

"I love my country and I don't want to be ashamed of it but I'm worried over the next four years- there will be reasons to be ashamed," she said.

Some younger Hungarians are so despondent over the future that they plan to join the waves of emigration which have seen the country's population fall under 10 million.

The university has been one of the most prominent targets of Fidesz's assault on civil society institutions, funded as it is by Hungarian-born US billionaire George Soros.

The government accuses Soros of wanting to flood Hungary with Muslim and African immigrants.

"The university is definitely moving, in my opinion," said Fruzsi.

"It's been open knowledge that the university has been in talks with city authorities in Vienna about a move so that was the first thing I thought when I heard the news - goodbye CEU."

One thing that Hungarians on both sides of the increasingly bitter divide may agree on is the uselessness of the opposition.

It is hamstrung not only by an electoral system which observers say was stacked against it, but also by its own divisions and lack of a clear, convincing message.

"The left wing and liberal parties need to find a way to open up their voice and speak to people outside their circles, who aren't university educated," says Edina.

"Even now I'm seeing people like us, who are anti-Fidesz, saying about Fidesz voters: 'Oh, they're all idiots.' This will be very alienating."

Even the corruption allegations directed at Orban's inner circle that marked the closing phases of the campaign seemed to have left voters cold - including those who believed them.

"I know they steal but the others do too," said mechanic Laszlo, 45, back in Lorev.

As long as Fidesz's voters remain wary of the opposition, Orban's supremacy is likely to continue unchallenged.

Many of Orban's voters "do not love Fidesz, in fact far from it", said Analyst Agoston Mraz of the Nezopont think-tank.

"But they still think that Fidesz is... the only party fit to govern."