NEW YORK • British Prime Minister Boris Johnson said yesterday that he will get on with delivering Brexit by Oct 31, after the Supreme Court ruled his suspension of Parliament was unlawful, effectively giving lawmakers another chance to prevent the Premier from orchestrating the UK's exit from the European Union without a deal.

"Obviously this is a verdict that we will respect and we respect the judicial process," Mr Johnson said in a pooled TV interview in New York. "I have to say that I strongly disagree with what the justices have found. I don't think that it's right but we will go ahead and of course Parliament will come back."

"The most important thing is we get on and deliver Brexit on Oct 31 and clearly the claimants in this case are determined to frustrate that and to stop that," Mr Johnson added. "I think it would be very unfortunate if Parliament made that objective which the people want more difficult, but we will get on."

Mr Johnson, who was at the United Nations yesterday, cut short his trip to fly back to the UK last night, his office said.

The Prime Minister is expected to face an angry Parliament today, when lawmakers will try their utmost to prevent him from orchestrating a so-called no-deal Brexit.

Some opposition MPs have called for a confidence vote in Mr Johnson, and House of Commons Speaker John Bercow has indicated that he would allow time for this if a formal request were made.

Parliament was suspended, or prorogued in the formal term, from Sept 10 to Oct 14.

The prorogation was approved by Queen Elizabeth, Britain's politically neutral head of state, on the advice of Mr Johnson. 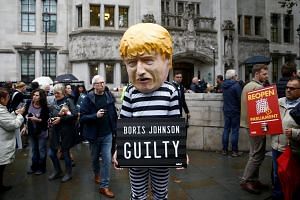 What is Britain's Supreme Court ruling all about?

Some lawmakers, including those thrown out of Mr Johnson's Conservative Party for rebelling against his Brexit plans, had said he should resign if he was found to have misled the queen.

"It is impossible for us to conclude, on the evidence which has been put before us, that there was any reason - let alone a good reason - to advise Her Majesty to prorogue Parliament for five weeks," Supreme Court president Lady Brenda Hale said yesterday.

European lawmakers hailed the Supreme Court's decision yesterday as a victory for democracy.

European Commission officials, who are locked in talks to try and revive the Brexit agreement, were cautious about being drawn into comment on British affairs.

But parliamentarians did not hold back, congratulating their Westminster counterparts on a legal victory against Mr Johnson.

"At least one big relief in the Brexit saga: the rule of law in the UK is alive and kicking," said Mr Guy Verhofstadt, former Belgian premier and now head of the Brexit steering group in the EU Parliament. "Parliaments should never be silenced in a real democracy. I never want to hear Boris Johnson or any other Brexiteer say again that the European Union is undemocratic." British opponents of EU membership often deride the bloc's leaders as "un-elected Brussels bureaucrats".