LONDON • British Prime Minister Boris Johnson will hold an election in the days following Brexit if lawmakers sink his government with a vote of no confidence, the Financial Times reported yesterday, citing unidentified senior aides to the Prime Minister.

The FT said his aides expect he will face a confidence vote soon after Parliament returns from its summer break.

"We can't stop them forcing an election but we control the timetable so we will force the date after Oct 31," the FT quoted a senior 10 Downing Street official as saying. "If there must be a general election, then it will be days after Oct 31."

Another close aide to Mr Johnson did not deny that any election would be held in the first few days of November, the FT said.

Mr Johnson has vowed to take Britain out of the European Union by that deadline "do or die", even if it means doing so without an agreement with the EU.

Mr Johnson is set to be tested when Parliament returns next month.

Opponents of a no-deal Brexit - including members of his own Conservative Party - are plotting to thwart him. With a paper majority of just one, Mr Johnson is vulnerable to any rebellion, and opposition Labour Party leader Jeremy Corbyn has signalled that he will call for an "early" vote of no confidence in the government. 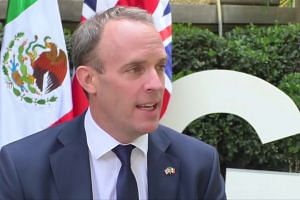 If Mr Corbyn's manoeuvre succeeds, Parliament could force the appointment of a new premier at the helm of a government of national unity, Mr Dominic Grieve, a Tory and former attorney-general, said on Monday.

Hence it is not surprising that Mr Johnson has urged lawmakers to support an Oct 31 Brexit, saying they had promised to honour the result of the country's 2016 decision to leave the EU.

Asked about the prospect of losing a confidence vote in Parliament and whether he would then delay an election until after Brexit, he said: "We are going to leave the European Union on Oct 31, which is what the people of this country voted for."

Meanwhile, British Foreign Secretary Dominic Raab said that the EU's uncompromising stance on Brexit makes progress towards a new deal "very difficult", in the latest signal that Britain may crash out of the bloc without an agreement.

The United Kingdom will "strive every sinew" to reach an "acceptable" deal, he said on Wednesday.

"There is a deal to be done," he said. "If the EU's position is that there can be no change to the withdrawal agreement, then that will be a choice that they've made and that makes it very difficult to see how we can move the negotiations forward."