ROME (AFP) - Italy stepped up security for mass demonstrations by far-right and anti-fascist groups across the country on Saturday (Feb 24) as tensions rise ahead of next week's general election.

There has been a dramatic increase of violent clashes between anti-fascist and far-right activists in recent weeks, particularly after a racially motivated attack on February 3 by a far-right gunman in the central city of Macerata that left six African migrants wounded.

Three thousand police were mobilised in Rome on Saturday for two marches and three sit-ins by both left and right groups likely to draw up to 20,000 people.

Another anti-fascist protest in Rome, organised by a left-wing union, will rail against the Jobs Act, a flagship reform of Mr Renzi's government. One of the sit-ins will be hosted by Giorgia Meloni, head of the far-right Brothers of Italy party.

Roberto Fiore, head of the extreme-right Forza Nuova group, will march in Palermo, Sicily, after one of his party's activists was beaten up by men wearing masks there on Tuesday.

The far-left Potere al Popolo movement will also hold a rally in Palermo. 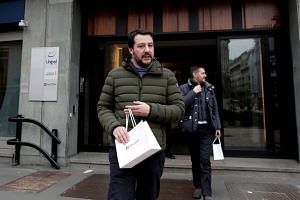 Matteo Salvini, the head of The League, will attend a demonstration in Milan. The far-right group formerly known as the Northern League is part of former prime minister Silvio Berlusconi's right-wing coalition, along with Brothers of Italy.

The far-right CasaPound movement will also march in Milan.

Yet another demonstration will be held in Brescia, northern Italy, where an ANPI social centre was torched on Thursday night.

On the same day three police officers were injured after clashes with anti-fascist protesters demonstrating against a CasaPound meeting in the northwestern city of Turin.

The spike in violence comes amid fears of a revival of far-right parties in the March 4 election.

An average of the last major polls suggested Mr Berlusconi's right-wing coalition could finish on top, but fail to achieve a parliamentary majority.