DUBLIN (REUTERS) - Ireland will aim to ensure there is as little friction as possible in trade across its border with British-ruled Northern Ireland if Britain crashes out of the European Union without a deal, Finance Minister Paschal Donohoe said on Tuesday (Feb 5).

The future of the border, which will be the United Kingdom's only land frontier with the EU after its departure, is proving the major hurdle in ensuring the UK quits the bloc in an orderly fashion when it is due to depart in 52 days time.

Britain, Ireland and the EU want to avoid physical checks on the border, which was marked by military checkpoints before a 1998 peace deal ended three decades of violence in the region. But they disagree on the "backstop", or insurance mechanism, to put in place to exclude such border checks.

The Irish government is also refusing to countenance contingency plans for how the border would be managed if there were a no-deal Brexit, saying only that there would need to be"very difficult conversations" between Dublin, Brussels and London over future border arrangements if Britain left without a deal.

"What we would want to do is be in a position where we have as low friction trade as is possible in the kind of scenario you are describing," Donohoe told a parliamentary committee when asked how the European Commission would facilitate its wish to have no physical border infrastructure, even in a no-deal.

"The whole reason we want a backstop in the first place is to avoid being in the scenario of a risk to the movement of goods on our island. If we are in the situation of a disorderly Brexit and we don't have a backstop, there will be trade-offs and choices that have to be made regarding how that issue will be dealt with."

As a way to prevent a hard border, Brussels and London agreed the so-called backstop - a promise that unless and until the sides come up with a better idea the United Kingdom would remain bound by EU market and customs rules so that goods would not have to be checked. 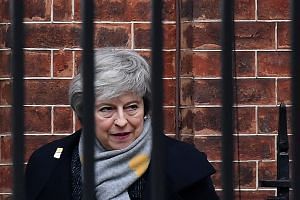 While it is by far the most contentious part of the rejected deal for many lawmakers in Britain, Dublin has sought to emphasise that its concerns go beyond trade.

"The Irish government have made clear that we will not be putting in place procedures or checks on our border and the reasons for that transcend the discussion we are having about economics," Donohoe said.

"I know the consequences would stretch all over our island and deeply affect the stability and peace that we have and for those reasons, the government continues to be clear in its objective."