BRUSSELS (AFP) - Deep divisions over migration are set to resurface at an EU summit on Thursday (June 28), with warnings that failure to act could fuel authoritarian and populist movements.

While the bloc has drastically curbed the flow of migrants since the 2015 crisis, it remains split over how to cut arrivals further, and over what to do with people once they do reach Europe's shores.

Here are some of the key proposals being debated:

The only thing all EU countries agree on is the need to reduce the number of people risking their lives at sea to reach Europe.

In 2016, the bloc struck a multi-billion-euro deal with Turkey to take back migrants who cross by boat to Greece.

Last year, Rome sealed a similar deal with Libya's coastguard that significantly cut the flow of African migrants across the central Mediterranean to Italy, from 119,000 in 2017 to around 14,000 so far this year. 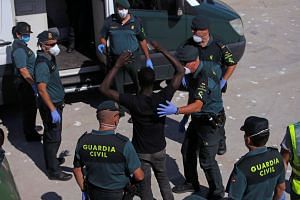 EU split on migration at 'mother of all summits' 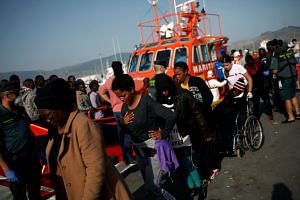 Immigration and euro to test EU leaders at summit

Leaders are set to endorse "disembarkation platforms" outside Europe, where people rescued at sea would be taken to determine whether they qualify for asylum or are classed as economic migrants who can be sent home.

Tunisia has been cited among the countries that could host such a platform, designed to discourage migrants from boarding boats for Europe and to break the smugglers' business model.

The European Council, which is organising the summit, suggested working with the UN High Commissioner for Refugees and the International Organisation for Migration.

But the plans are vague and face questions over their legality.

With EU rules saying asylum claims must be processed in the country of arrival, the movement of migrants across EU borders has caused tensions within the bloc, and threatens German Chancellor Angela Merkel's fragile coalition.

Merkel, after allowing more than one million asylum-seekers into Germany since 2015, faces an end-of-the-month deadline from her own interior minister to seal pacts with other countries that would let Germany turn back asylum-seekers already registered in other EU states.

Italy is calling for the asylum rules on the country of arrival to be scrapped.

The EU also has proposed redistributing asylum-seekers across member countries in times of crisis in order to ease the pressure on coastal states like Italy and Greece.

But Former eastern communist countries Hungary, Poland, the Czech Republic and Slovakia opposed a permanent distribution mechanism. They are backed by Austria, which is invited to continue work on the issue when it takes over the EU's six-month rotating presidency on July 1.

EU countries set temporary quotas in 2015 to relocate 160,000 Syrian and other asylum seekers from Italy and Greece. In the end, only around 34,000 were relocated.