RIGA (AFP) - Hundreds of Latvians marched through the capital Riga on Tuesday to protest against the Baltic state's decision to take in 776 refugees as Europe struggles with a record migrant crisis.

The 500-strong crowd, according to police, waved banners calling on the government to resign and depicting European Commission head Jean-Claude Juncker as dictator Adolf Hitler.

Other slogans included "Against immigrants" and "The Baltic is ours" at the rally attended by two members of the right-wing National Alliance, one of three parties in the government ruling coalition.

"The refugees are not victims, most of them are here for money," protester Pols Vaivods said, while clutching a banner in praise of Hungary and its Prime Minister Viktor Orban, who gave his army new powers this week to block the migrant influx.

"This is not racist. We are against taking in refugees but we can help them in other ways, maybe by sending medical aid," protestor Ainis Pogris said. 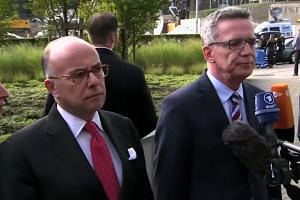 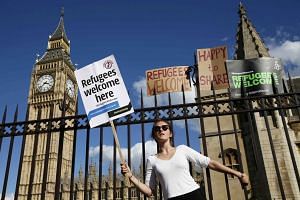 Latvia is part of the European Union's eastern flank whose countries have taken the strongest stance against welcoming migrants.

The region's Czech Republic, Hungary, Romania and Slovakia voted against an EU plan that the bloc's ministers nonetheless managed to push through on Tuesday to relocate 120,000 refugees.

Latvia's government agreed last week to take in its share of refugees under the EU plan championed by Germany.

Onlookers at the Latvian rally included German tourist Khristina Gerhen, who disagreed with their stance.

"I don't think it's fair. We are expecting 800,000 refugees this year so Latvia should do its part too," said the tourist from Riga's twin city Bremen.

Frenchman Roger Ravel from Lyon said the demonstration reminded him of events held by the far-right National Front party in his homeland.

"It's surprising to see it here, but countries really need to think whether they want to be part of the European Union or not," Ravel told AFP.