She looked a bit Audrey Hepburn-ish, (or was it more Jennifer Lopez in "The Wedding Planner") and he as uniformed as a man could look.

The world witnessed a transformative moment for the Royal House of Windsor, but will the couple's personalised, multi-cultural wedding affect bridal trends to come? Here are a few ways it might.

1. A DIVORCÉE WEARS WHITE. AND WHY NOT?

Yes, she is now Her Royal Highness the Duchess of Sussex, but no one would have imagined her transformation while watching the understated, divorced American bride at her second wedding.

Will divorced women take Ms Markle's lead and have big weddings, even bigger than the first, and wear white gowns? Both have been no-no's in the past for American weddings.

And will green be the new complimentary colour for mothers and the rest of the bridal party?

There was no ostentatious bling on the unadorned bridal dress Ms Markle wore that was designed by Ms Clare Waight Keller for Givenchy. 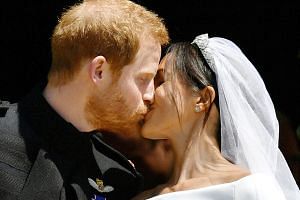 Sealed with a kiss, Prince Harry and Meghan Markle are married

Wedding gowns fit for royalty: What Meghan Markle and other royal brides wore on their big day

In 2011, when Princess Kate married Prince William, owners of American bridal emporiums assumed they would sell high-neck, long-sleeve lace dresses, similar to the one Ms Middleton wore. After all, doesn't every bride want to look like a princess?

Designers and store buyers were so certain of this that they quickly stocked their showrooms with similar designs in many price points, low and high.

How wrong they were.

Brides-to-be here admired the royal gown from afar, but then searched out the barest, strapless, most embellished dresses available for themselves.

"We probably still have a few left," said Mr Ronnie Rothstein, an owner of Kleinfeld in New York, a store that was well stocked in dresses that looked like Kate's and now has at least a half-dozen that resemble Meghan's.

"Remember women want to dance at the reception and you can't move in a dress with sleeves. They are too restrictive," he added, trying to come up with a polite reason for the unsold goods.

Ms Darcy Miller, an editor-at-large for the magazine Martha Stewart Weddings, said she is noticing more classic, simpler bridal dresses paired with dramatic veils. Just like Ms Markle wore at her wedding. (Although her veil was 4.9m long - probably not in the future for American brides.)

Ms Markle wore a simple diamond tiara once worn by Queen Mary; of course that was a royal privilege - a loan from Queen Elizabeth - but stores do sell simple tiaras and embellished veils.

3. NO BORING CEREMONIES. BE YOU.

The ceremony took place in an austere Anglican Church and although there were traditional elements, this was no button-up royal ceremony.

Pastor Curry spices up royal wedding with power of love

The Most Reverend Michael Bruce Curry, an African-American from Chicago and the presiding bishop of the Episcopal Church, gave a spirited homily alongside Justin Welby, the archbishop of Canterbury, who was the officiant.

Reverend Curry's sermon, spoke of love and inclusion and took the words of Martin Luther King Jr, to invigorate - and surprise - the royal family and other guests.

Ms Natalie Neilson Edwards, who owns Broomstick Weddings, a company that specialises in organising interfaith, interracial and mixed cultural events, said it is more and more common to see two clergy members at weddings today because many couples have different backgrounds. And that is a trend very likely to continue.

Music was another way this royal wedding was more personalised than in the past. So long Anglican hymnal.

Stand by Me, sung by the Kingdom Choir, which is based in south-east London, was unexpected and seemed to create a stir among some in the church.

And, the 19-year-old cello soloist, Mr Sheku Kanneh-Mason, wowed churchgoers immediately after the ceremony. (He is the first black musician to win the BBC's Young Musician Award in its 38-year history.)

"I was blown away by the inclusion of the bride's culture," Ms Neilson Edwards said. "There were many African-American guests and an African-American bishop. It was very empowering to see how clear the bride was about her culture."

Ms Neilson Edwards added, "According to the 2010 census here, one-sixth of weddings in the US are mixed racial."

And with more modern vows like the newly minted duke and duchess chose - there was no mention of "man and wife" (they said husband and wife) and no mention of obeying - places of worship might seem more inviting for couples who want to personalise.

4. THE CHILDREN AS BRIDAL PARTY

Move over bridesmaids and groomsmen and make room for the children.

Meet the bridesmaids and page boys for the royal wedding

The royal wedding might have finally changed some long-standing bridal traditions like who makes up the bridal party.

Enlist the little ones! They are much cuter anyway! (And you can only hope as well behaved as the royal children were for the duke and duchess.)

Forget asking your best friend to be a bridesmaid or groomsman. Let them save (lots of) money, take a seat, and watch your happy day. Don't make your best friends buy dresses they'll never wear again.

Another advantage to skipping the bridesmaids and groomsmen? Nobody's feelings are hurt when they don't make the cut.

5. WALK DOWN THE AISLE: I'VE GOT THIS

"Brides are escorting themselves down the aisle, like Markle did for example. Now we are getting married our way," she said.

Prince Charles to walk Markle down the aisle

Yes, Ms Markle ended up walking alone most of the way down the aisle after her father bowed out, but now, can you imagine her wedding any other way?

Mr Vishal Joshi, the chief executive of Joy, a wedding planning website and app, said: "I think brides should do what they feel like doing. Literally brides used to be given away by their father to their husband like property. There was a negotiation before a wedding. There is some cuteness to tradition but not all traditions have good origins and some have to be taken down."

Now many couples live together before marrying, he said, adding, "our generation should create new traditions."

Will brides wear less makeup and be adorned with just a little jewellery after seeing Ms Markle wearing diamond stud earrings (forget big chandeliers) and a thin diamond bracelet, both from Cartier?

But her nod to modernity and individualism was the demure but noticeable diamond nose stud.

7. A WHITE BOUQUET. ALSO, GO TO YOUR GARDEN.

It would be elegant if white floral bouquets like Ms Markle's make a comeback now, even though there has been a lot of colour added to American weddings.

The language of flowers is important and romantic, too; Ms Markle's bouquet had a sprig of myrtle in it - a sign of hope and love, often in British royal bridal bouquets.

It also included some flowers hand-picked by Prince Harry (forget-me-nots, a favourite of his mother, Princess Diana) from the Kensington Palace garden the day before the wedding.

8. OUT WITH THE OLD. A FRESH AND LOCAL CAKE

Americans, it may be time to deconstruct those towering, tiered (or do we mean tired?), sugary wedding cakes that most people don't eat anyway and get creative with flavour and design.

They chose the flavours of lemon and elderberry-flower baked and heavily decorated with fresh flowers by Claire Ptak, a London-based baker who owns Violet Cakes and uses local organic and seasonal ingredients.

Instead of the towering tier, it was presented as four cakes on three separate resting places (one golden plate and two golden goblets) situated at varying heights.

There were 600 at the reception. We don't know if they all ate cake. But here is what it was made of: 200 Amalfi lemons, 500 organic eggs from Sussex, about 20kg each of butter, flour and sugar, and 10 bottles of Sandringham elderflower cordial.