MESSINA (Sicily) • Now that the European Union has struck a deal with Turkey to curb the record refugee flow into Greece, the question is whether the migrant flow into the continent has been stanched, or whether migrants will simply find a different entry point, such as the more dangerous sea route from Libya into Italy.

Migration into Greece has dropped sharply since the new deal, and it is too soon to know if the Syrians, Iraqis and Afghans who favoured that route will shift their attentions to Italy.

Either way, Italy could surpass the record 170,000 migrants who arrived in 2014, a reminder of an oft-overlooked dimension of Europe's refugee crisis. 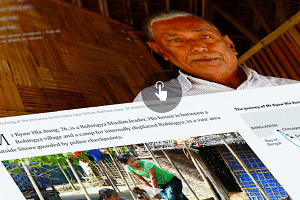 Even as last year's stampede of Syrians through Greece and the Balkans plunged Europe into a political crisis, Italy was absorbing migrants from Gambia, Mali, Nigeria, Somalia and other sub-Saharan African countries.

"Now, with the Balkan route closed, people are asking, 'What will happen with the central Mediterranean?'" said Ms Medea Savary, a spokesman in Sicily for the United Nations' refugee agency. "There is never enough attention on this."

Before last summer, Italy was the epicentre of the refugee crisis - and the rest of Europe largely ignored the problem. Tens of thousands of migrants risked their lives on dangerous journeys aboard rickety smuggler boats leaving the coasts of Libya or Egypt to reach Italy.

Before last summer, Italy was the epicentre of the refugee crisis - and the rest of Europe largely ignored the problem. Tens of thousands of migrants risked their lives on dangerous journeys aboard rickety smuggler boats leaving the coasts of Libya or Egypt to reach Italy.

The trip could take several days, in difficult seas, and more than 3,000 people died last year. But then smugglers discovered routes from the Turkish coastline to Greek islands such as Lesbos and Chios.

Many Syrians and Afghans who had been trying to reach Italy quickly shifted to this more convenient journey. During the final six months of last year, more than 780,000 people went through Turkey into Greece, and then through the Balkans towards Germany and Sweden, until Balkan countries and others began erecting fences to block their passage.

Now, Austrian leaders are concerned that as many as 300,000 migrants could arrive in Italy this year and attempt to move north.

In response, the Austrian Defence Minister, Mr Hans Peter Doskozil, announced this week that the country would introduce tougher border controls at the crucial Brenner Pass, the alpine crossing to Italy that is one of Europe's most important north-south corridors.

Mr Doskozil said the new controls would take effect from June 1, and has suggested that Austria may build fencing similar to the controls the country erected along its border with Slovenia.

Italian leaders have expressed serious concerns and sent a letter to the European migration commissioner, asking his office to "verify with extreme urgency" whether the Austrian plans violated Europe's Schengen Agreement on open internal borders.

Beyond the negative impact on trade and shipping, tightening controls at the Brenner Pass could also bottle up migrants inside Italy.

Hundreds of kilometres to the south, in Sicily, aid workers and Italian officials are preparing for a busy summer, as the warmer weather and calmer seas of springtime arrive. The latest rescues came on Tuesday, when 17 migrant ships bearing 2,150 people were intercepted at sea.

Admiral Nicola De Felice, who oversees the Italian navy's operations in Sicily, said that for now the biggest problem was the lack of a stable government in Libya.

"The situation there is very confused," Admiral De Felice said in an interview.

"That could create problems, both in lacking any controls over the migrant influx, and to the terrorist threat. We don't know what is happening in Libya."

A version of this article appeared in the print edition of The Straits Times on April 16, 2016, with the headline 'Has flow of refugees been blocked or just diverted?'. Subscribe
Topics:
More
Whatsapp Linkedin FB Messenger Telegram Reddit WeChat Pinterest Print Purchase Article Copy permalink