STOCKHOLM (AFP) - Swedish climate activist Greta Thunberg said Monday (July 29) that she would cross the Atlantic on a racing sailboat to attend a UN climate summit in New York in September.

"I've been offered a ride on the 60 ft. (18-metre) racing boat Malizia II. We'll be sailing across the Atlantic Ocean from the UK to NYC in mid August," Thunberg, 16, said on Twitter.

It will be her first visit to the US since she launched her environmental drive a year ago.

Thunberg - who has inspired thousands of her peers in many parts of the world to press their elders to act on climate change - refuses to fly owing to the negative impact on the environment.

German Boris Herrmann and the Monaco-based founder of the Malizia team Pierre Casiraghi will steer the boat, which is to carry a sail marked "#Fridays for future".

The phrase stems from Thunberg's decision to skip school on Fridays so she could push for action against climate change in front of the Swedish parliament.

"After months of research and considering different options for her journey, Greta will sail across the Atlantic in a zero-carbon racing boat called Malizia II, a foiling sailboat built in 2015, which is fitted with solar panels and underwater turbines to generate electricity on board the vessel," Herrmann said on his website. 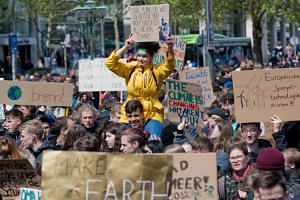 Climate champion Greta Thunberg plans one year out of school

Once in the United States, she is to take part in "large-scale climate demonstrations on September 20 and 27 and speak at the United Nations Climate Action Summit, hosted by Secretary General Antonio Guterres," he added.

Her spokesman could not be reached Monday for confirmation of the complete itinerary, but people close to Thunberg have already said that she would attend the COP25 conference.

British daily The Guardian said she would also be accompanied by her father Svante, and a filmmaker.

Casiraghi, the grandson of Monaco's late Prince Rainier III and US-born actor Grace Kelly, has said the boat's name was taken from the Moneguesque language and meant "the wily one."