LONDON (BLOOMBERG) - Mr David Solomon had a message for Goldman Sachs Group Inc employees shaken by the firm's involvement in a multibillion-dollar fraud scandal: This isn't us.

"I am personally outraged that any employee of the firm would undertake the actions spelled out in the government's pleadings," the firm's chief executive officer said in a voicemail left with employees on Wednesday (Nov 14).

"The behaviour of those individuals is reprehensible and inconsistent with the good work and integrity that defines work that 40,000 of you do every day."

The bank's stock has suffered since prosecutors implicated a trio of Goldman Sachs bankers in a multibillion-dollar Malaysian fraud early this month.

On Monday - when the country's Finance Minister said he would seek a full refund of all the fees it paid for Malaysian state fund 1Malaysia Development Berhad (1MDB) deals - Goldman's shares tumbled the most in seven years.

The bank's stock dropped for a fifth straight day on Thursday, falling 0.3 per cent at 11.43am in New York, putting it on track for the biggest five-day slump in seven years and cutting Goldman's market value by more than US$10 billion (S$13.75 billion).

Analysts and investors have been trying to estimate what the financial fallout of the scandal will be for the firm, after it said in a filing this month that it could face significant fines.

Mr Solomon said in his voicemail that "any speculation in the press or elsewhere" on outcomes for the firm "is completely unfounded".

A spokesman for Goldman Sachs confirmed the authenticity of the voicemail and declined to comment further. 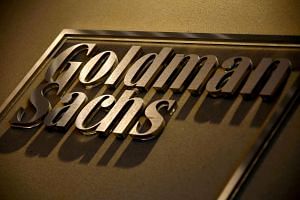 Goldman Sachs is trying to counter arguments that fault lies beyond a few employees.

Tim Leissner, the bank's former chairman of South-east Asia, admitted in a plea that he bribed officials to get the bond deals and said a culture of secrecy at the investment bank led him to conceal wrongdoing from the company's compliance staff.

The firm's then CEO Lloyd Blankfein personally helped forge ties with the country and 1MDB years before Goldman Sachs ever arranged the bond deals at the heart of the probes.

Mr Blankfein attended a 2009 meeting with the former Malaysian prime minister that laid the groundwork for the relationship between the two entities, Bloomberg first reported earlier this month.

"Reputationally, it is a disaster for Goldman," Oppenheimer & Co analysts led by Mr Chris Kotowski said in a note to clients on Wednesday. "Goldman clearly is at risk of significant charges with significant penalties in this case."

Analysts at Sanford C. Bernstein & Co estimated that Goldman Sachs could see fines of up to US$2 billion from the scandal, a figure they said was "ultimately manageable" for the firm.

"A group of people, including some of us in the executive office, are intensely focused on this matter," Mr Solomon said on the voicemail.

"For the rest of us, our job is to focus on our clients, our business and the many opportunities ahead."