WASHINGTON (WASHINGTON POST) - Natasha, 25, remembers how it felt to watch a grown man harass her 10-year-old sister. They were walking home from school in their uniforms when an older man wound his window down and whistled.

"It just made me feel sick," she told researchers. "How can you not see they're children?"

A new survey from Plan International UK has found that to be an all-too-common occurrence.

One-third of girls in Britain say they have been sexually harassed while in their school uniforms. In Britain, nearly all schoolchildren wear uniforms.

Respondents in the survey reported being catcalled and whistled at. One in seven said they have been followed home while they were in their required attire.

Some say men have tried to take pictures up their skirts, leaving them feeling "sexualised and fetishised".

"I'm not allowed to go out in my uniform any more," a student named Nyasha, 14, told researchers. "My mum says I look older than I am." 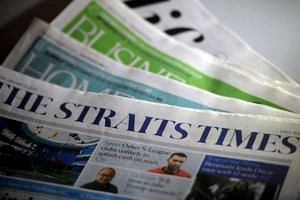 Another woman, Ffion, 25, recalled the harassment that came her way in high school.

"I've never experienced harassment like I did then," she said. "Men would ask if they could take a picture with me in my uniform. It was awful. Before that, I used to walk home and I was so scared walking home."

Harassment starts early, researchers found. Children as young as eight reported being victims of, or witnesses to, harassment. Two-thirds of the children questioned in the survey said they have experienced "unwanted sexual attention" in public. And 35 per cent said they have been touched, groped or grabbed without their consent.

Additionally, 8 per cent of respondents said they have been filmed or photographed by a stranger.

Many girls said they feel harassment is "all part of growing up".

Plan International UK has called street harassment a form of "gender-based violence". It has pushed for a public information campaign to communicate that harassment is not okay, as well as bystander training to teach witnesses how to safely intervene.

"It's simply not acceptable that girls as young as 12 are being wolf-whistled at in public, touched against their will, stared at or even followed," Tanya Barron, who runs Plan International UK, told the BBC.

"This disgraceful behaviour needs to be called out and stopped."