BERLIN (BLOOMBERG) - Chancellor Angela Merkel stepped in to halt a government crisis over her party's flirt with the far right in eastern Germany, defusing one threat to her political legacy while potentially setting the stage for the next.

Under fire from the governing coalition in Berlin, the premier of the eastern state of Thuringia limited the immediate fallout by resigning on Saturday (Feb 8). His election with the votes of Merkel's party and the nationalist Alternative for Germany (AfD) had set off the political firestorm.

Yet it took Merkel's return from a trip to Africa to contain the crisis, underscoring the weakness of her successor at the helm of the Christian Democratic Union (CDU) party and the domestic pressures on Merkel as she seeks to keep Germany on the centrist path that has defined her more than 14 years in office.

It was a lesson in crisis management for CDU chairwoman Annegret Kramp-Karrenbauer, a Merkel protegee who has struggled to make her mark and stake a claim to succeeding Merkel as chancellor in the next federal election in 2021.

AKK, as Kramp-Karrenbauer is known, had tried since Wednesday to establish control after Thomas Kemmerich, a Free Democratic Party politician, was elected state leader of Thuringia with help from local CDU lawmakers.

That broke a taboo established by national parties, including the CDU, never to cooperate with the Alternative for Germany party, or AfD. It incensed the Social Democrats, Merkel's coalition partner in Berlin.

Merkel took the first step shortly after her plane touched down on Saturday morning in Berlin. She contacted her top liaison for the eastern German states, Christian Hirte, to tell him that his services were no longer needed.

Hirte, the CDU's leader in Thuringia, had applauded Kemmerich's election with the AfD's help as a victory of the political centre.

At 1pm, Merkel met with her CDU-led party bloc and the Social Democrats at the chancellery in Berlin to avert a possible breakup of the coalition after the SPD's two national leaders in a newspaper interview threatened to leave the government if Kemmerich didn't resign immediately.

Two hours later, the coalition demanded exactly that and called for an early state election soon. Around the same time, Kemmerich tweeted he was resigning with immediate effect after insisting a day earlier he wouldn't.

In the statement, Merkel's coalition called the circumstances of Kemmerich's election "unforgivable," echoing language she used on Thursday during a visit to South Africa. 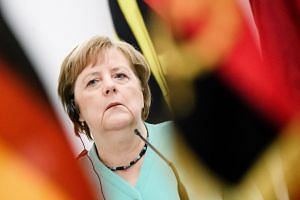 Kemmerich's exit and the call for elections in Thuringia helps avoid an immediate bust-up with Social Democrats, which had pressed Merkel's CDU to be more aggressive in seeking his removal.

Now, Merkel will have to deal with detractors in her own party.

CDU officials in Thuringia, who saw their party's slump in the last election in October, opposes sending voters to the polls again. Kramp-Karrenbauer spent Thursday night in Erfurt, the state capital, unsuccessfully trying to persuade them otherwise - until Merkel sought o lay down the law from Berlin on Saturday.

Part of Merkel's loss of authority in her waning years stems from the CDU's collapse in the formerly communist east. The AfD, which built a nationwide base by denouncing Merkel's openness to refugees, has capitalised on the region's prosperity and jobs gap with western Germany.

Alternative for Germany more than doubled its support in Thuringia to 23.4 per cent in the last election, pulling ahead of a slumping CDU. That set up this week's election of Kemmerich, whose FDP party barely made it into the state legislature but was eager for a share of power.