BERLIN (BLOOMBERG) - The unified European approach to resolving tensions in the Persian Gulf showed signs of strain, with a senior German official warning that the UK may be drifting closer to an American-led operation that had previously been rebuffed by the governments in Paris and London.

That is according to Mr Johann Wadephul, a lawmaker with German Chancellor Angela Merkel's Christian Democratic Union, who holds a senior position on the foreign affairs committee.

"The new government appears to have changed course to align with the Americans," Mr Wadephul said in an interview. "The US is pursuing a completely different path than the one we are."

Mr Raab told The Times over the weekend that any EU naval mission wouldn't be "viable" without US support.

On Monday, he told BBC radio that he wanted as broad a coalition as possible.

Simmering tensions with Iran involving attacks on tankers and drones is driving a wedge between the US and its European allies, with the UK and France last week essentially opting out of the US-backed "Operation Sentinel". 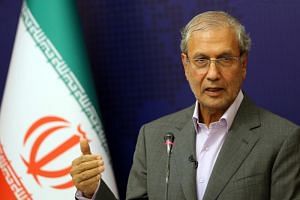 Iran says European naval mission in Gulf would be 'provocative'

Germany doubled down on its position and all but ruled out a new US request to help secure the vital shipping artery through the Persian Gulf.

Mr Nils Schmid, a Social Democratic lawmaker on the foreign affairs committee in Germany's Lower House, said he would only side with a non-military EU effort in the region.

Foreign Minister Heiko Maas ruled out participating in a US-led proposal during a closed-door meeting with lawmakers last week, he said.

"Europeans don't want to go along with this confrontational logic of the US government," Mr Schmid said in an interview on Tuesday (July 30).

President Donald Trump's administration ratcheted up pressure on Dr Merkel on Tuesday, with a statement from the US embassy saying it had formally sought help from Germany, France and the UK to secure the Strait of Hormuz and "combat Iranian aggression".

"Members of the German government have been clear that freedom of navigation should be protected," a spokeswoman for Ambassador Richard Grenell said in an e-mailed statement. "Our question is, protected by whom?"

An official with Germany's foreign ministry said any alignment with Mr Trump's campaign of "maximum pressure" is out of the question - and that the request had been acknowledged, without offering any contribution.

Dr Merkel's government is instead in close contact with French and British counterparts, the official said on condition of anonymity.

Dr Merkel's CDU, which governs on the federal level with the Social Democrats, is less resistant to a military-oriented mission. Mr Wadephul said that, for now, he could support German aerial surveillance involvement.

But unlike the British and French military, German participation in foreign missions has to be approved by the Lower House of Parliament, or Bundestag, meaning that Social Democratic opposition rules out any such move.