FRANKFURT AM MAIN (AFP) - German firms must begin planning for a worst-case "hard Brexit" that would slash trade between Britain and the EU if no deal is reached at an EU summit next week, a powerful industry body said on Tuesday (March 13).

"Otherwise, some companies will be forced to bring their contingency plans into focus for the worst-case scenario, which no one wants and which will damage everyone," BDI director Joachim Lang said in a statement.

Negative effects from the approach of Brexit were already apparent, the BDI pointed out, with Britain dropping from second- to fifth-most-important trade partner for Germany last year.

Agreeing a transition period after Britain's formal departure from the EU bloc by next week is tricky, as London and Brussels are at loggerheads over how to organise the border between the Republic of Ireland and British province Northern Ireland.

Britain intends to leave the EU's single market and customs union, which suggests the need for border controls somewhere.

The EU text says Northern Ireland must stay in a customs union with the rest of the bloc if no better way is found to avoid a hard Irish border - which Britain rejects. 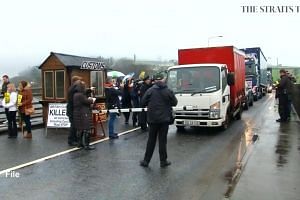 Factbox: Britain's May sets out stance for new trade ties with EU

"As long as the UK doesn't present such a solution, it is very difficult to imagine substantive progress in Brexit negotiations," EU Council President Donald Tusk said last week.

If a compromise can be found, Britain could finally move on from negotiating its terms of exit - mainly concerning its financial obligations, the rights of EU citizens in the UK and UK citizens in Europe, and the Irish border - to the post-Brexit relationship including the transition period.

After a mooted status quo transition of around two years, "the minimum requirement for German companies is trade in goods without customs duties or quotas, ideally in a customs union," BDI chief Lang said.

But British Foreign Minister Boris Johnson said last week that a hard Brexit and trade with the EU on WTO terms "doesn't hold terrors for me".