DRESDEN/BERLIN • Far-right groups spread "fake news" on social media to mobilise their supporters for violent protests targeting migrants after the fatal stabbing of a German man, said officials in the eastern German state of Saxony where the protests took place.

German police have arrested a 22-year-old Syrian man and a 21-year-old Iraqi man over Sunday's stabbing in the town of Chemnitz, which provoked two days of protests, including clashes between far-right and leftist demonstrators.

The stabbing and the protests have exposed deep divisions in German society over the influx of more than one million migrants, mostly Muslims fleeing Middle East conflicts, after Chancellor Angela Merkel's decision in 2015 to let them in.

On Tuesday, Dr Merkel repeated her condemnation of both the stabbing and the protests, saying that scenes - depicted in amateur video clips - of migrants being chased through the streets were completely unacceptable in a state based on the rule of law.

Mr Michael Kretschmer, the premier of Saxony and a close Merkel ally, vowed to deal firmly with extremists in his state, long a hotbed of support for far-right parties.

"We believe that at least some of the calls that were circulated online (to join the protests) were based on false information, on fake news," he told a news conference in the state capital Dresden. 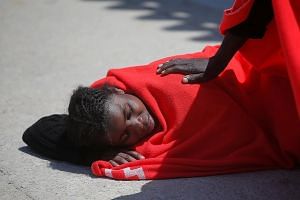 Germany to take in 50 migrants rescued off Italy

Merkel's immigration crisis far from over

He cited a report circulated on social media that the 35-year-old man who was stabbed had been defending a woman from migrants - there was no evidence to support the claim, Mr Kretschmer said.

Saxony's Interior Minister Roland Woeller said the protests had drawn far-right supporters and anarchist groups from Berlin, the nearby states of Brandenburg and Thuringia and as far away as North-Rhine Westphalia in north-western Germany.

"We saw a significant mobilisation effect - that means that anarchists travelled from far beyond the region and state borders, especially right-wing violent actors ... from the hooligan scene and from the football scene," he told reporters.

At least five people are facing charges for performing the "Hitler salute", which is banned in Germany, and a comprehensive investigation is continuing, police officials said. They also said nearly 20 people had been injured in Monday's demonstrations, where fireworks were thrown.