MARSTON MORETAINE, ENGLAND (REUTERS) - He turned 100, raised nearly £40 million (S$70 million) for Britain's health service and was knighted by the queen. But for Captain Tom Moore, the achievements of 2020 aren't over: he has written an autobiography and plans more charity work.

The World War II veteran became a national hero for a fundraising campaign that involved him walking the length of his garden 100 times, turning him into a symbol of hope as the country struggled to contain the coronavirus pandemic.

"I hope I can go on for a long time, because I've got to hang on a bit until this book gets published probably," Moore, who now has the title "Sir", told Reuters.

"The family at different times say: 'You can't die yet, you've got to get all these different things done,' so I can't die yet. When this book is finally gone out into the world may be I can then, but that's not my intention."

Moore, who turned 100 in April, was referring to his autobiography, Tomorrow Will Be A Good Day, which describes his upbringing in northern England, passion for motorbikes, relationships, service in the war and late brush with celebrity.

Its title sums up Moore's optimism, which struck a chord at a time when deaths from Covid-19 were mounting and Britain, like most other countries, went into strict lockdown to contain the disease.

"There's no doubt the country is going through a little bad patch," he said, speaking in the garden of his home in Marston Moretaine near Milton Keynes, north of London.

"We shall get through it. It will get better... So when I'm gone, I hope all you people look on the bright side and think that something will get better, as it will."

CHAIR AND A HANDBAG

Moore, wearing a dark blue blazer and his campaign medals, said he was enjoying his fame, and one of the highlights was meeting Queen Elizabeth when she bestowed on him his knighthood.

"That was number one, because she is a charming person. I loved being with the queen," he said. 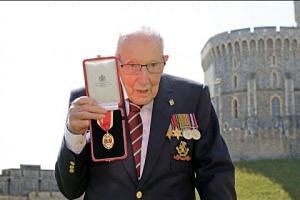 He recalled how he was momentarily confused by the curious case of a chair and a handbag.

"Before the queen came, someone brought an armchair... and I thought: 'That's for the queen to sit on'. But it's not true. That was for her handbag... The chair was purely for the handbag."

His daughter, Hannah Ingram-Moore, is helping him launch the Captain Tom Foundation, which aims to raise money to give to charities tackling issues including loneliness, bereavement, education and equality.

In his wife's final weeks, he would visit her in a home every day and was struck by how lonely some people there were.

"He saw and we witnessed this loneliness in its truly tragic form, so... we are representing her and all those lonely people," Ingram-Moore said.

She described how Moore's global fame impacted the family; he has received 150,000 letters from well-wishers and 7,500 presents, and they continue to arrive.

Asked about what the future held for her father, she replied: "Well, the world's his oyster isn't it? Anything could happen. There's talk of a film, of course he's written a children's book... keep watching, it could be anything."