PARIS (AFP) - French "yellow vests" demonstrators on Saturday (March 30) staged their 20th week of anti-government protests despite bans in hotspot areas, as banks called for an end to violence against branches, cash machines and personnel.

Police had struggled two weeks earlier to contain violence by highly-organised demonstrators who smashed shop windows and set fire to newspaper kiosks and a bank in the capital.

Local authorities on Saturday declared iconic sites such as the Champs Elysees avenue in Paris and the centre of Bordeaux, in southwestern France, off limits to demonstrations.

The presidential Elysee palace and the National Assembly were also cordoned off by police.

President Emmanuel Macron has reacted to the Saturday protests, which began last November, by embarking on a cross-country tour as part of a "Great National Debate" aimed at encouraging disgruntled citizens to express themselves through a structured dialogue.

The protests began in rural France on Nov 17 over fuel tax increases and quickly ballooned into a full-scale anti-government rebellion.

In recent weeks, the protesters' numbers have dwindled but those still on the streets appear more determined.

Initial reports at midday Saturday said that around 300 demonstrators had gathered at the Paris Gare de l'Est train station and the Paris prefecture said two demonstrations and four gatherings had been organised, with one march to end near the Eiffel Tower.

"It is still the same goal, social justice and the RIC (citizen initiated referendum), especially when there are economic choices to be made," said a 43-year-old demonstrator who gave his first name as Jean-Edouard.

The French banking federation called for an end to attacks during "yellow vest" protests, saying that more than 760 banks have suffered damage since the movement began last year.

Banks have often been the targets of vandalism and arson during the protests, and last week 11 people were injured when a Banque Tarneaud branch was set on fire near the Champs Elysees. 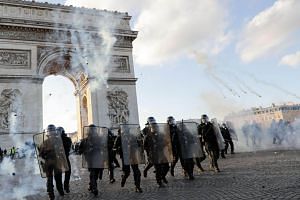 "We must quickly put a stop to this unbridled and unjustified violence," the federation said in comments published in the daily Le Monde.

With the Paris authorities clamping down, regional protests came into focus, with protests bans in other city centres, including Avignon, Lille and Toulouse.

People who take part in unauthorised demonstrations risk an increased fine of €135 (S$200).

In Bordeaux, where violent clashes have broken during previous protests, the Mayor Nicolas Florian shut down the city after authorities warned of the possible arrival of "hundreds of thugs".

Residents were urged to stay indoors to avoid unintended clashes with police.

A demonstration was planned in the Mediterranean city of Nice, where a 73-year-old activist was injured last week after she was pushed by police and hit her head while falling.

Police had initially insisted that no officer pushed the woman, but rectified that position following an internal investigation.

Last Saturday, 40,500 people demonstrated across France according to police while "yellow vest" sources put the figure at more than 127,000.

Last week, Macron continued to meet with mayors as part of regional tours linked to the national debate.

He is scheduled to end the tour Thursday on the Mediterranean island of Corsica.