Videos of French shoppers jostling as they tried to grab cut-price tubs of the chocolate spread in Intermarche stores went viral on the Internet last month.

"Our agents have concluded that Intermarche did not respect measures in place concerning selling at a loss, which is a criminal offence," a DGCCRF spokesman told AFP.

The agency said its investigation found Intermarche had sold four products marked down 70 per cent, including Nutella, at a loss, a tactic used to draw shoppers in to spend on other products.

The other products were Pampers nappies, Carte Noire cafe and Perrier sparkling water. 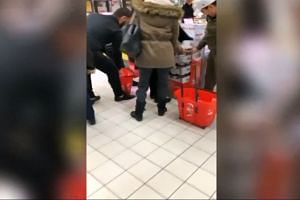 Videos of the shopping frenzy were shared thousands of times on social media, with comedian Anthony Joubert racking up a million plays on a song featuring the lyrics, "A euro for Nutella, I'd kill a mother or father for that."