Mr Fillon, 62, is a Catholic free-market reformer whose proposals have earned comparisons with the ideas of Britain's reforming 1980s prime minister Margaret Thatcher.

His surprise runaway victory in the first round of the right-wing presidential primary reversed the balance of power with his former boss, ex-president Nicolas Sarkozy.

Mr Sarkozy dismissed Mr Fillon as an "employee" when he served as his prime minister from 2007 to 2012.

On Sunday (Nov 20), as he crashed out of the race behind Mr Fillon and the veteran Alain Juppe, Mr Sarkozy pledged his support for the man who in office was an unflappable antidote to the frenetic president.

"Francois Fillon seems to me to have best understood the challenges facing France," Mr Sarkozy said.

With the French left riven by division, the winner of next Sunday's second round of the right-wing primary is forecast to reach the run-off of the presidential election in May.

There, if polls are to be believed, he would almost certainly face Marine Le Pen, leader of the far-right National Front (FN). 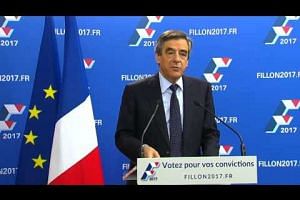 Mr Fillon's clear lead over 71-year-old Juppe in the first round suggests he will comfortably clinch the nomination.

"We are several laps ahead," Mr Fillon, a motor-racing enthusiast who was born in Le Mans, home of the world-renowned 24-hour race, told his supporters.

Perhaps it was because of his soft-spoken style that his rivals failed to see his late acceleration in the two-month primary campaign - at the start he was a distant third place in opinion polls.

Mr Fillon's economic proposals clearly struck a chord with right-wing voters - he wants to scrap the 35-hour week, one of the sacred cows of the French left.

That is coupled with a pledge to slash an eye-popping 500,000 jobs from the bloated public sector.

On Monday, his rivals were seeking to paint him as a dangerous reformer whose proposals will never fly.

He already fought off such accusations in a candidates' TV debate before the vote.

"I'm tagged with the label of an (economic) liberal in the same way they would daub crosses on the doors of lepers in the Middle Ages," Mr Fillon said. He argued he was merely "a pragmatist".

Mr Fillon's social beliefs reflect his personal life as a father of five children and practising Catholic who has been married to his Welsh wife Penelope for more than 30 years.

He voted - unsuccessfully - against gay marriage when it was introduced by then Socialist President Francois Hollande and has said he wants to amend the 2013 law.

He has also voted against allowing single women or lesbians to have medically assisted pregnancies.

While Mr Sarkozy made the headlines with his hard-right views on Islam, Mr Fillon's own opinions were controversial, but expressed carefully in a book on the "risk" France faces from radical Islam.

The two were close when they were both prime ministers and Mr Fillon has called for a rapprochement with Mr Putin on Syria, where Russian forces have tipped the war in the regime's favour.

Mr Fillon said during the campaign that to defeat the Islamic State in Iraq and Syria (ISIS) militant group, the West should make alliances with Syrian President Bashar al-Assad's regime, although he stopped short of calling for Mr Assad to be allowed to stay in power.