LYON (AFP) - A defrocked French Catholic priest accused of sexually abusing dozens of boy scouts decades ago told his trial on Wednesday (Jan 15) that he himself had suffered similar assaults in his youth, in an unexpected twist to his defence.

After confessing in court on Tuesday to "caresses" he knew were forbidden, after victims testified to the horrors they suffered, Bernard Preynat, 74, faulted the church for failing to help him deal with his own urges.

During the second day of the trial in the French city of Lyon, Preynat surprised even his own lawyer in raising for the first time in court the abuses he said he suffered in his youth.

He referred to a letter written in the summer to Michel Dubost, the apostolic administrator in Lyon, where he said he had been repeatedly sexually abused by a priest, a sacristan from his parish and a seminarian.

He had never revealed these details before being questioned by a police inspector in 2016.

"I would not say I am surprised. These kinds of things happen in court. But if he had not spoken of it, it's perhaps for fear people think he is trying to clear himself," his laywer Frederic Doyez told AFP on the sidelines of the trial.

"Without accusing" the church, the former priest questioned the hierarchy's responsibility for not insisting he be treated even though they were alerted about his sexual urges.

"They should have helped me... They let me become a priest," Preynat said, referring to fruitless therapy in 1967 and 1968.

He said he had told his confessor about actions and urges he described "as a sin" but the "priest gave me absolution and encouragement to ensure I don't start again." Several victims protested against what they said were attempts by Preynat to play down the events.

The accusers were aged seven to 14 when the alleged crimes were committed between 1971 and 1991, when Preynat was a scout leader in Lyon. 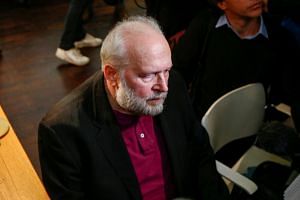 French priest recounts how he abused boy scouts over decades

The allegations against him sparked the biggest crisis in the French Church in decades and last year saw a cardinal convicted of covering up the alleged crimes.

Preynat was defrocked by the Church last July.

Former scouts have claimed he touched and kissed them and forced them into reciprocal fondling while they were in his care, including at camps. He denies ever kissing the boys on the mouth.

He said he had tried to commit suicide.