PARIS (AFP) - French President Francois Hollande acknowledged on Sunday (June 5) there was a threat of an attack during the Euro 2016 football championship but said the country must not be intimidated.

The acknowledgement came one day ahead of media reports that a French citizen detained in late May in Ukraine had been planning attacks in France to coincide with the Euro 2016.

Hollande also issued an appeal for a halt to transport strikes that threaten to disrupt the month-long football extravaganza opening on Friday. 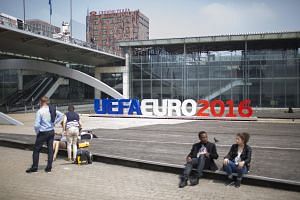 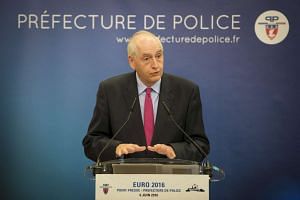 "This (attack) threat exists," he told public radio France Inter. "But we must not be daunted. We must do everything to ensure that the Euro 2016 is a success."

The Ukrainian border guard service reported on Saturday that an unnamed 25-year-old had been arrested with an arsenal of weapons and explosives including rocket launchers and Kalashnikov assault rifles in his vehicle.

SBU chief Vasyl Hrytsak said the man had made contact with armed groups in Ukraine with the aim of buying weapons and explosives.

His intended targets included Jewish and Muslim places of worship and buildings involved with the soccer tournament, Gritsak said. French government administration buildings, including those dealing with tax collection, were also a target.

"The Frenchman spoke negatively about his government's actions, mass immigration, the spread of Islam and globalisation, and also talked about plans to carry out several terrorist attacks," Gritsak told journalists.

"The SBU was able to prevent a series of 15 acts of terror (planned) for the eve and during the Euro soccer championship," he said.

A French foreign ministry spokesman confirmed that a Frenchman has been arrested in Ukraine and said the ministry was in contact with Ukrainian authorities.

The country is on high alert for possible terror strikes during the football extravaganza opening on Friday, following the extremist attacks in Paris in January and November last year.

The United States warned last week of the risk of attacks, with the French stadiums hosting the matches but also the so-called fan zones where spectators will be gathering in large numbers potential targets.

France has also been in the grip of nationwide protests and transport strikes over controversial labour reforms, with the sense of malaise compounded by flooding in the Paris region.

A final round of negotiations is due to take place between French rail operator SNCF and the government in a bid to break a five-day strike that has blocked trains and created transport chaos across the country.

And Air France pilots are threatening to start a four-day strike on June 11, when the Euro tournament is in full swing, and a major protest is planned in Paris on June 14.

"No-one would understand if the trains or the planes... prevented the smooth transport... of spectators."