PARIS (REUTERS) - French media and reporters'organisations on Sunday (Jan 13) denounced attacks on journalists by "yellow vest" anti-government protesters and called for better protection after a series of incidents this weekend.

Paris police fired water cannon and tear gas to push back demonstrators from around the Arc de Triomphe monument on Saturday (Jan 12), in the ninth straight weekend of protests against French President Emmanuel Macron's economic reforms.

Journalists covering the protests are increasingly becoming a target for the demonstrators.

In the western city of Rouen, LCI television reporters were attacked by a group of protesters. One of the security agents working with the TV crew was beaten while he was on the ground and had his nose broken, with footage of the incident widely shared on social media.

In Paris, an LCI reporter was pushed to the ground as demonstrators tried to take away her camera, the station said, adding that it will take legal action against the attackers.

Several other stations, including BFM TV and franceinfo, on Sunday showed images of reporters being hassled or pushed around during Saturday's "yellow vest" marches. 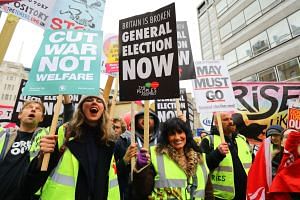 "This is anti-democratic blackmail from people who consider they can beat up journalists if they disagree with the way events are covered," he said on France Info radio.

Interior Minister Christophe Castaner said on his Twitter feed that anyone attacking reporters will be brought to justice.

"In our democracy, the press is free ... attacking journalists is attacking the right to inform," he said.

France has been rocked by yellow vest protests against Macron's reforms since the middle of November in a movement that has no designated leaders and is not linked to political parties or unions.

Started as a protest against high fuel prices, the movement has morphed into a fight for social justice and more direct democracy. Several demonstrations have degenerated into violent clashes with police.

Over the coming week, Macron will launch three months of national debate to air yellow-vest grievances in the hope of appeasing the movement, which has undermined his authority and upended his reform drive.