PARIS (AFP) - France's Emmanuel Macron accepted the resignation of his interior minister, the Elysee Palace said on Wednesday (Oct 3), in the latest blow to the president who had earlier refused to allow his loyal ally to quit.

Gerard Collomb, who had been seen as one of Macron's most robust defenders, had indicated two weeks ago that he intended to step down next year, but he came under increasing pressure and made an initial attempt to resign on Monday, only to be rebuffed by the president.

In an announcement early Wednesday the Elysee confirmed that Macron had accepted a fresh bid to quit from Collomb.

The president has "accepted the resignation of Gerard Collomb and asked the prime minister to act in his place until the announcement of a successor", it said in a statement.

Collomb, a political heavyweight, had previously announced that he planned to run for his old job as mayor of the city of Lyon.

He said he would stay on as minister until European elections in May, but came under pressure to step down immediately as critics complained that his priorities had already turned to the campaign trail.

Late on Monday, Macron's office said the president had vetoed his resignation attempt, insisting on "his confidence" in the 71-year-old. 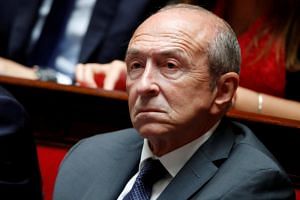 But Collomb on Tuesday had said he still intended to quit, throwing the French political establishment into confusion.

Prime Minister Edouard Philippe cancelled a trip to South Africa planned for Thursday and Friday after being asked to step in, his office said.

Under the French Constitution, the president names and removes ministers upon instructions from the premier.

Collomb has previously compared his relationship with Macron, 31 years his junior, to that of a father and son. He wept during Macron's inauguration in May 2017.

But their relationship is reported to have soured this summer over a scandal surrounding Macron's former security aide Alexandre Benalla.

The former bodyguard was filmed roughing up protesters while wearing a police helmet, and a vast political scandal blew up when it emerged that senior officials knew about it.

Appearing at a parliamentary inquiry, Collomb had pointed blame at Macron's office, saying it was their responsibility to report the incident to prosecutors.

Collomb previously served as Lyon mayor for 16 years until Macron poached him for the interior ministry, and it had long been rumoured that he was eyeing a fourth term running the eastern city.

His looming departure adds to a pile of woes for Macron, whose approval ratings are languishing at around 34 per cent.

The former investment banker came to power at the head of a new centrist party promising to clean up politics and revive France's sputtering economy.

But his government has been forced to cut its growth forecast to a lacklustre 1.6 per cent this year as his pro-business reforms struggle to have the desired effect.

He was swiftly followed by another popular member of the Cabinet, former Olympic fencing champion Laura Flessel, who resigned as sports minister for "personal reasons".