PARIS (AFP) - Seven right-wing presidential hopefuls will compete in the first round of a US-style primary on Sunday (Nov 20) that is widely expected to decide France's next leader.

Polls show the winner of the two-round Nov 20-27 nominating contest meeting - and beating - far-right National Front leader Marine Le Pen in the second round of the election in May.

The race is seen as a three-way affair between Alain Juppe, Nicolas Sarkozy and Francois Fillon, with the four other candidates all polling under 10 per cent. 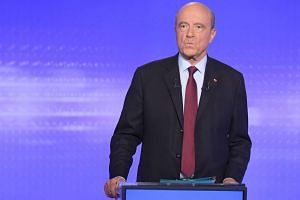 Race wide open as France ticks down to presidential primaries

Former prime minister Alain Juppe, 71, has campaigned as a moderate and a sage who will unify a country divided by a deep economic malaise and a wave of Islamic militant attacks.

The man with the longest resume in French politics, including stints as foreign and defence minister under Sarkozy, has attempted to banish the gloom with his vision of a "happy" national identity.

In 1995, the then premier's attempts to push through reforms sparked huge protests that paralysed France. Juppe says he is a "changed" man and now more open to dialogue.

He spent a few years in the political wilderness after a party funding scandal in 2004, in which he was seen as the fall guy for his mentor Jacques Chirac.

Sarkozy has accused him of being "soft" but Juppe insists he "stands his ground".

Former president Nicolas Sarkozy, 61, promised to blow the competition out of the water as he bids to win back the keys to the Elysee Palace but has so far failed to land a knockout blow on his arch-rival Juppe.

In a strategy that cost him re-election in 2012 he has again lurched to the right on immigration, security and Islam in a bid to woo voters tempted by the National Front.

The son of a Hungarian immigrant, Sarkozy was elected in 2007 on a promise of reforms.

But his taste for the high life - he is married to former top model Carla Bruni - and failure to enact many of his promises led voters to cast him out after a single term.

After telling the French they would never hear from him if vanquished, he returned to lead the Republicans party in 2014 as the champion of the "silent majority".

"How many Brexits, how many American elections, how many lost European referendums do you need to finally hear the anger of the people?" he told a rally this week.

Francois Fillon is hoping to cause an upset by winning a place in the Nov 27 run-off as a compromise choice with more bite than Juppe but less punch than his former boss Sarkozy.

Fillon became the youngest member of the French parliament at age 27 in 1981 and held several ministerial portfolios under Jacques Chirac.

As Sarkozy's prime minister from 2007 to 2012 his unflappable, avuncular style made him an antidote to the hyperactive president.

The 62-year-old is best remembered for having warned before the eurozone debt crisis that France was living beyond its means.

A car-racing fanatic, he has come from behind in the last weeks of the campaign on a pledge to cut half a million civil servant jobs, increase the working week from 35 to 39 hours and reduce immigration to the "strict minimum".

Agriculture minister under Sarkozy from 2009 to 2012, Bruno Le Maire, 47, has struggled to shake off an image of slightly stodgy, over-educated technocrat.

"My intelligence is an obstacle," the clean-cut politician once famously declared.

His programme comes in the form of a 1,012-page "contract" with the French.

At 43, former environment minister Nathalie Kosciusko-Morizet is the youngest candidate, and the only woman.

A maverick who has called for cannabis to be decriminalised, she was sacked by Sarkozy as the Republicans' vice-president in December 2015 after she criticised his leadership.

Known in France by her initials NKM, she made an unsuccessful bid to become Paris mayor in 2014.

Jean-Francois Cope, 52, was forced to resign as president of the UMP, the forerunner of the Republicans Party, in June 2014 over a campaign finance scandal that has also embroiled Sarkozy.

A former budget minister and advocate of an "uninhibited right" he was led red-faced recently after revealing he had no idea of the price of a pain au chocolat, a French breakfast staple.

"I think it must be around 10 or 15 centimes," he said of the pastry that sells for around 10 times that.

The head of the Christian Democratic Party, 53-year-old Jean-Frederic Poisson has taken a firm stance against gay marriage, legalised in France in 2013.

He courted controversy during the campaign for refusing to rule out voting for Le Pen in the unlikely event she meets current Socialist president Francois Hollande in the election run-off in May.