PARIS (AFP) - The French government announced plans Thursday (Mar 1) to clamp down on Airbnb, saying it would fine the home-sharing giant for carrying ads from people who do not register their properties with local authorities.

Paris - the world's third-most visited city, according to a Mastercard ranking - is one of Airbnb's top markets, with some 65,000 homes listed.

Another 35,000 are available on rival platforms.

Faced with complaints from hoteliers as well as locals who believe that holiday rentals are fuelling property speculation and pricing them out of the market, the city of Paris has already slapped restrictions on short-term rentals of apartments and rooms.

"Home-sharing platforms are good because they allow people to increase their purchasing power and visit cities at a lower cost," Julien Denormandie, the junior minister responsible for housing, told France 2 television.

"But there are rules. It's now the law of the jungle."

Since Dec 1, anyone wanting to rent their French home on an online platform must register it and display a number on their ad. 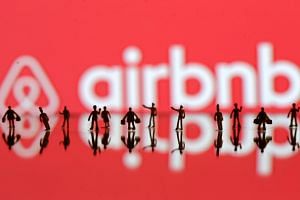 Airbnb listings up 11% since S'pore ban took effect last May

The system allows authorities to ensure the property is not being rented for more than 120 days a year - the maximum duration a person can rent out their main residence - and also ensure they are paying their taxes.

But many homeowners are flouting the rules and continue to advertise properties they have not declared.

Airbnb has come under heavy scrutiny in France, where tax authorities are tightening the noose around homeowners who fail to declare their rental income.

In December, the city of Paris threatened Airbnb with legal action, saying only about 11,000 of its Paris listings had been registered with the authorities, around a fifth of the total.

No updated figures were immediately available.