PARIS (REUTERS) - France's Parliament defied US pressure on Thursday (July 11) by giving final approval to a tax on big technology companies, potentially opening a new front in a trade row between Washington and the European Union.

Paris is not alone among capitals in Europe and beyond in proposing a tax on big tech firms. Here are some of the others:

Britain has been among the most vocal proponents of taxes on big tech companies that focus on making it more difficult to shift profits to low-tax jurisdictions.

Finance Minister Philip Hammond has said Britain will unilaterally implement a digital service tax if there is no international agreement soon.

Last year, he proposed that Britain tax profitable companies at 2 per cent of the money they make from UK users starting in April 2020, raising more than £400 million a year.

This would apply only to firms above a "quite substantial" size. 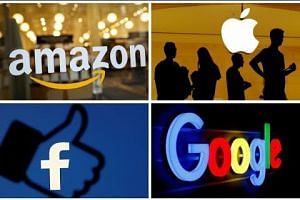 It is not clear whether Britain's next prime minister will follow through with the proposal.

The Spanish government approved a draft law modelled on what the European Commission had proposed. It would tax large companies 3 per cent of their digital revenue, bringing an estimated €1.2 billion (S$1.84 billion) to state coffers every year.

Only companies with global revenues of at least €700 million, and €3 million in Spain, would be subject to the tax. The Bill still faces Parliament discussions that could take several months.

Socialist leader Pedro Sanchez faces a confirmation vote as prime minister later this month. If he is endorsed and is able to form a government, the tax could still be approved this year.

Italy introduced a tax on "digital services" in the 2019 Budget, but the government has not yet issued the decree to activate the new measure and it is not clear when it will do so.

The new tax is meant to apply to digital companies with annual revenues of not less than €750 million, of which at least €5.5 million are generated in Italy. The tax rate was set at 3 per cent of revenues in Italy.

Austria in April increased the size of its planned tax targeting tech companies to 5 per cent of their advertising revenue in the country from 3 per cent previously.

The right-wing coalition government that put the plan together collapsed in May and a Bill is yet to pass through Parliament.

The leader of Denmark's new Social Democratic government said last year when she was in opposition that she would implement a digital tax if elected.

Earlier this year, Australia abandoned plans for a digital services tax, opting instead to wait for a global agreement on the best way to handle the taxing the revenues of tech giants.

Singapore will levy a tax on overseas suppliers of digital services from next year in order to keep pace with the growing digital economy.

Time for a 'data tax' on Google, Facebook and Amazon?

The so-called "Netflix tax", announced in the 2018 Budget, will expand the goods and services tax (GST) to firms without a physical presence in the country.

The 7 per cent GST - which is set to rise to 9 per cent between 2021 and 2025 - will be collected from vendors that sell more than S$100,000 in digital services to Singapore consumers and have a global turnover of over S$1 million.

This means that content streaming services, software and mobile app downloads, for example, may get more expensive if firms pass the added costs on to consumers.

The Singapore Government has said the tax will level the playing field for local retailers, which are already subject to GST.

The tax is expected to bring in revenue of around S$90 million a year.

Malaysia will implement a digital tax from next year, with the rate set at 6 per cent.

This comes after Parliament approved the tax to close a legal loophole that allowed foreign online service providers to not pay taxes in Malaysia since it has no physical operations in the country.

The government said the tax is introduced to provide a level-playing field between local and foreign companies, but experts say the tax is likely to be passed on to consumers.

Tax consultants however see little impact on consumers since most belong to the middle-income group who are capable of absorbing the tax charge.

The tax is only applicable to companies earning over RM500,000 from Malaysian consumers and on any person providing digital service - regardless of nationality - located outside of Malaysia.

India does not have a digital tax like France's, but the Income Tax Department is set to scrutinise international firms such as Google and Facebook for any under-reporting of their revenues in India, according to a report in the Business Standard newspaper.

In 2016, the South Asian country imposed an equalisation levy of 6 per cent, which is a tax deducted at source on the payments made by Indian companies to foreign e-commerce firms that are not based in India. The tax is applicable to payments of more than 100,000 rupees (S$1,981) a year for online advertising.

Finance Minister Nirmala Sitharaman, at the recent Group of 20 meeting of finance ministers in Japan, had asked member countries to come up with a solution of taxing profits made by digital companies that do not have a physical presence in countries where they operate.

Separately, India has been pushing Internet firms like Facebook and Google to store data of Indian users in local servers in order to safeguard citizen data. International firms usually store data on global servers so this Indian rule means that they have to make investments in India.

A digital tax in the vein of France's announcement is unlikely to happen in China, which has, in recent years, been progressively expanding tax relief for high-tech service firms in its bid to foster innovation, attract foreign capital, and grow its services industry.

In 2016, Beijing broadened the scope of activities related to research and development that would be tax-deductible for such firms, including travel and conference activities.

Last year (2018), the State Administration of Taxation and related ministries further reduced the corporate tax rate of Technology Advanced Service Companies (TASCs) to 15 per cent even as it expanded the definition of TASCs.

Companies that now qualify as TASCs include those in IT outsourcing, information system integration, and cultural and media firms that do dubbing and production.
This May (2019), the State Council and Finance Ministry also announced extended a tax holiday for software development and semiconductor firms against the backdrop of the ongoing US-China trade war.

Japan plans to table a Bill in its Parliament next year to regulate technology giants, after having led the Group of 20 (G-20) bloc of eminent economies last month to an Osaka Declaration that agreed to push forward on digital taxation.

The move comes as the tax sheriff has gone after IT giants like Google Japan and Softbank in recent years for reducing their tax liability by declaring Japan-taxable income in overseas jurisdictions that grant tax concessions.

According to the draft law seen by Kyodo News, Japan aims to increase oversight on these companies by improving the transparency of their business transactions.

The draft law, which expresses concerns that domestic and global tech giants could unilaterally force rules onto small businesses or make them take on excessive costs, will include built-in protections.

Major tech firms – including the GAFA group of US companies Google, Apple, Facebook and Amazon – will need to make public any contract terms, Kyodo cited the draft law as saying.

In January this year, Tokyo found Google Japan to have failed to declare 3.5 billion yen in advertising income for 2015. This revenue was generated in Japan but recorded in Singapore, and Google Japan paid back taxes of 1 billion yen.

Last year, Softbank was found to have failed to declare 93.9 billion yen in income earned overseas, including in Bermuda and in Singapore, for four years ending March 2016. The company paid additional taxes of 3.7 billion yen.

South Korea from July 1 started imposing a 10 per cent tax on digital services provided by foreign tech giants, such as cloud computing and online advertisements, in a bid to address concerns of tax avoidance and unfair practices.

With the new rule, foreign tech firms from Google to Apple, YouTube, Amazon and even Airbnb will have to pay the same amount of value-added tax as Korean firms.

The move is expected to generate about 400 billion won (S$S$462 million) a year in tax revenue for the Korean government - up from the 132 billion won paid by foreign tech companies last year.

A Bill was passed in parliament last December to amend the Value-added Tax Act that required foreign firms to pay tax on a limited number of services, such as mobile app store sales.

The revised law requires a wider range of services - most notably high profit-generating services - to be subject to the tax.

Lawmaker Park Sun-sook, who proposed the revision to the Bill last year, said the new rule will provide a legal foundation to broaden the discussion on digital taxes. “We made a step forward in the digital economy,” she said then.

Indonesia sees the value-added tax (VAT) as the quickest measure a country impose to get tax revenue from foreign e-commerce companies while a global consensus on tax norms and standards evolve, Mr Poltak Maruli John Liberty Hutagaol, the director of international tax at the finance ministry, said earlier this week.

Local e-commerce unicorns like Bukalapak and Tokopedia – where people buy and sell goods using virtual wallets – are hit with a 25 per cent corporate tax rate in Indonesia. But foreign-registered competitors such as Ebay and Alibaba are not paying any taxes in the country. Authorities have been exploring ways to level the playing field.

Suggestions include making it a requirement for e-commerce firms that sell to consumers in the world’s fourth-most populous nation to disclose their audited financial reports, and having them incorporate local entities for tax purposes.