BRUSSELS - From manufacturers of spring roll pastry and frozen prata to services firms and serviced residence operators, Singapore companies big and small stand to gain from the European Union-Singapore Free Trade Agreement that was signed on Friday (Oct 19).

The FTA will be up for a vote in the European Parliament early next year, and enters into force once it is ratified. When that happens, the Ministry of Trade and Industry (MTI) estimates that over 80 per cent of Singapore exports will be able to enter the EU tariff-free.

Among those who stand to gain are Singapore food manufacturers. Their goods made in Singapore can enter the EU tariff-free, up to a combined quota of 1,250 tonnes a year.

Another feature of the deal allows manufacturers to include raw material and inputs sourced from Asean countries to determine whether they qualify for tariff concessions.

Another group of companies who stand to gain are firms offering a range of services which can bid for government procurement contracts, including at municipal level.

The EU has one of the largest markets for such procurement, and there are numerous opportunities for Singapore firms in areas from computer-related services to sewage and waste disposal, he said. 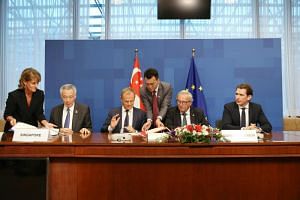 Mr Iswaran also said the FTA and Investment Protection Agreement (IPA) have "ambitious provisions to create more opportunities for businesses from both sides".

The IPA will first have to be sent to regional and national parliaments of EU member states for approval, before it enters into force.

Singapore Business Federation CEO Ho Meng Kit said the signing was "a timely development given the growing international trade tensions" and hoped companies can enjoy the benefits at the start of next year.

"SBF is committed to support the successful implementation of the FTA by promoting the new economic opportunities it offers to our companies, especially SMEs," he said, noting that exporters of electronics, pharmaceuticals, chemicals are also well-placed to benefit.

Mr Gerald Yong, CEO of CapitaLand International, which oversees and grows the Group’s global investment portfolio, said it could gain from the expected uptick in investment and business travellers in both markets. "We can also look forward to greater competitive edge and equal treatment as EU companies when bidding for contracts in the region," he said.

They also looked forward to the early completion of the ratification of the Comprehensive and Progressive Agreement for Trans-Pacific Partnership and reaffirmed their commitment to reaching a substantial conclusion of the Regional Comprehensive Economic Partnership soon. PM Lee's press secretary Chang Li Lin said the pacts "reflect Singapore and Japan's joint commitment to free trade and a rules-based multilateral trading system".