PARIS (AFP) - The father of the little boy who was rescued after dangling from a fourth-storey Paris balcony by a Malian migrant dubbed Spiderman received a three-month suspended jail sentence on Tuesday (Sept 25) for leaving the child home alone.

Mr Mamoudou Gassama was propelled to global stardom in May after footage of him scaling the facade of the apartment building with his bare hands to save the child went viral.

Mr Gassama, who was living illegally in France at the time, was rewarded with French citizenship and a job in the fire service.

But the 37-year-old father found himself in hot water for leaving the child unattended in their sixth-floor apartment while he went shopping - the boy was just four at the time.

Apart from the suspended sentence, he was also ordered to take a parenting course.

The public prosecutor had asked for the father to be given a six-month suspended sentence, noting that had Mr Gassama not sprung into action, the child "might now be dead".

The father told the court that after spending the day at the Disneyland theme park near Paris with his son on May 26, he decided to pop out for some provisions, leaving his son in front of the TV at his insistence.

Expressing remorse, he said he had not realised that by leaving the sliding door to the balcony open, the child was in grave danger.

He also admitted to being gone longer than he thought - around an hour - because he was playing the popular Pokemon Go game on his phone. 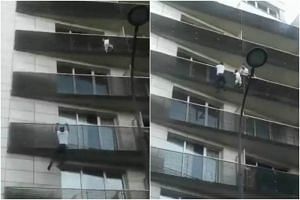 ‘Spiderman’ Malian who climbed 4 storeys to save child to get French citizenship: Macron

The child told the police he thought his father had gone back to Disneyland without him and decided to follow him.

Finding the apartment door locked, he climbed over the balcony and then appears to have fallen, before miraculously managing to grab the rail of a balcony on the fourth floor.

Footage of the incident, filmed by a bystander, shows him dangling in mid-air, with a neighbour on the adjoining balcony desperately trying to hold onto him.

Mr Gassama, 22, then scales the building Spiderman-style and pulls him to safety.

The boy's mother was on a visit to her native Reunion island, a French territory in the Indian Ocean, at the time.

Both parents were said at the time to be extremely shaken by the incident but hugely grateful to Mr Gassama.