LONDON (AFP) - Extinction Rebellion (XR) climate protesters are planning to bring disruption to 60 cities around the world from Monday (Oct 7) in a fortnight of civil disobedience, warning of an environmental "apocalypse".

"To governments of the world: we declared a climate and ecological emergency. You did not do enough. To everybody else: rebel," XR said on its website ahead of its International Rebellion wave of activism.

"This isn't a distant apocalypse. People all over the world are suffering and dying right now," XR said.

"Next, it will happen to you, and everybody you love, too. You can't count on us or Greta to do this for you," it said, referring to teenage Swedish climate activist Greta Thunberg. "Look inside yourself and rebel."

Extinction Rebellion was established last year in Britain by academics and has become one of the world's fastest-growing environmental movements.

In London, XR hopes to get 20,000 to 30,0000 people on the streets to shut down the area around parliament and the government ministries for two weeks from Monday, according to spokesman Robin Boardman.

The 21-year-old said the protests could be five times bigger than those in April, when demonstrators took to the streets for 11 days, sitting down to blockade roads, bridges and intersections. Police made more than 1,100 arrests. 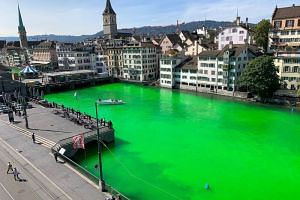 Fellow XR spokesman Joel Scott-Halkes said: "We're going to blockade and shut down every single road going into the central area of Westminster around the UK government.

"We are going to very loudly, very clearly, very respectfully say that if a government is taking its people towards extinction, it is not a government anymore that we respect."

A sit-in is also planned at London City Airport.

Ahead of Monday's demonstrations, XR used an old fire engine to spray 1,800 litres of fake blood over the front of Britain's finance ministry in London in a protest over investment in fossil fuel exploration.

In Paris, the activism kicks off with a "preview" on Saturday, where XR demonstrators have planned to occupy "a symbolic place of the system to turn it into a house of the people."

On Sunday, they plan to stage an "opening ceremony" festive event in a Paris park.

Different events are set to take place until October 12 on topics such as the ocean, plastic waste and migration linked to climate change. Traffic standstills and building occupations are planned.

Activists are stressing that the protests must be non-violent, but there are concerns about the response of the authorities.

In June, when activists occupied a bridge over the River Seine in Paris, XR members were evicted by the authorities using tear gas fired at close range.

Images of the incident were widely shared and criticised on social media, leading to an investigation.

"We are waging a just and legitimate fight to defend life," a French activist in her 30s, who wished to remain anonymous, told AFP.

"Yes, there will be blockades, the way to make the government understand is to block the economy, but there will also be acts of raising awareness, music, joy and colour," she added.

In Germany, XR is planning several peaceful demonstrations in Berlin on Monday to block streets and parks through civil disobedience, claiming it is "the fastest way to bring lasting social and political change".

"Peaceful, creative, colourful and determined!" it said. "We continue to protest until governments respond appropriately."