WASHINGTON/LUXEMBOURG (BLOOMBERG, AFP) - Top US officials on Wednesday (March 7) defended President Donald Trump's decision to impose steep tariffs on steel and aluminum imports after the EU warned Tuesday it would respond with its own 25 per cent tariff to hit US$3.5 billion of American goods.

US Commerce Secretary Wilbur Ross said the United States is not seeking a trade war and the tariff decision was “thought through”. Treasury Secretary Steven Mnuchin, meanwhile, said the tariff plan will not hurt his projections for US growth.

Mr Cohn, the former Goldman Sachs Group Inc. president, said Tuesday he would resign after what had become a bitter and personal dispute within the White House over Trump’s tariff plan. His absence will amplify voices like Mr Ross and trade adviser Peter Navarro who back the president’s impulses to buck convention and pick trade fights on a global stage.

Separately on Wednesday Mr Mnuchin said the tariff plan will not hurt his projections for US growth.

“We’re comfortable that we’re going to manage through this so that it is not detrimental to our growth projections,” Mr Mnuchin said in a Fox Business interview with Maria Bartiromo Wednesday. “We’re comfortable with the economic impact,” he said of the tariffs.

Mr Mnuchin reiterated the administration’s commitment to levy heavy tariffs on the metals, saying that the plan is “nothing new” and has been part of Trump’s “focused strategy” since his presidential campaign.

Trump’s call for tariffs on steel and aluminum imports has prompted an outcry not just from trading partners but also from within his administration and the Republican Party over concerns they will spark a global trade war. Republican lawmakers are pressuring Trump to at least curtail the tariffs’ reach to certain forms of the metals or by targeting a limited number of countries.

The threat of retaliation and escalating tit-for-tat penalties damaging growth around the world is already rising. 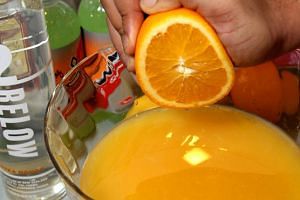 The EU warned Tuesday it would respond with its own 25 percent tariff to hit US$3.5 billion of American goods. The EU's top official hit back on Wednesday at Mr Trump, saying "trade wars are bad and easy to lose".

European Council President Donald Tusk also proposed that European Union leaders hold an emergency debate on the trade dispute at a summit in Brussels on March 22-23.

The bloc is targeting iconic US brands produced in key Republican states on a range of consumer, agricultural and steel products that will be levied if Trump goes through on his tariff threat, according to a list drawn up by the European Commission.

President Trump is “not afraid to get into a trade war, although that’s not what we want,” Mr Mnuchin said. “We are definitely going to end up with these tariffs and we are going to roll these out quickly.”

Mr Mnuchin has said that Canada, the U.S.’s biggest supplier of steel, could gain relief from the tariffs along with Mexico if they can reach an agreement with Trump on renegotiating the North American Free Trade Agreement.

The tariffs won’t apply to the US neighbours if a new trade deal is concluded, he said. Renegotiating the deal is key to improving the trade imbalance with China, he said, which will lead to a better investment environment for American businesses.

“We have to stand up for American companies,” Mr Mnuchin said.

Mr Ross also signalled the administration is open to exempting countries besides Mexico and Canada from the tariffs.

“The president indicated that if we can work something out with Canada and Mexico, they will be exempted. It’s not inconceivable that others could be exempted on a similar basis,” Ross said in an interview. “Whenever there’s a big change – an unexpected change – you have to expect some sort of a negative reaction. Let’s see how things come out over the longer term.” –

The European Commission, the 28-nation EU executive, warned on Wednesday it would hit flagship US products including peanut butter, orange juice and bourbon whiskey with counter measures if Mr Trump goes ahead with the metal tariffs.

The EU is holding fire on its reprisals as Mr Trump has yet to sign into effect his plan to set tariffs for what he calls unfair competition for US industry.

But Mr Tusk warned Mr Trump's plans could lead to "a serious trade dispute" between Washington and the rest of the world involving the EU. He said EU leaders should aim "to keep world trade alive and if necessary to protect Europeans against trade turbulences".

Mr Tusk added that such measures include proportionate responses in line with World Trade Organisation rules.

"President Trump has recently said and I quote, 'trade wars are good and easy to win,'" Mr Tusk told a press conference in Luxembourg on Wednesday, flanked by Luxembourg Prime Minister Xavier Bettel.

"But the truth is quite the opposite: Trade wars are bad and easy to lose," the former Polish premier said. "For this reason I strongly believe that now is the time for politicians on both sides of the Atlantic to act responsibly."