SOFIA (AFP) - Known for rolling up her sleeves, Bulgaria's Kristalina Georgieva has been lauded as the life of the party, as well as for her tenacity.

The guitar-playing environmental specialist, who was nominated on Friday (Aug 2) as the EU's candidate to head the International Monetary Fund (IMF), hasn't been in the media spotlight quite so much but is well used to top international roles.

Most recently tipped to lead the European Council, she lost that job to Belgium's Charles Michel in July, leaving her free to seek to succeed Ms Christine Lagarde as head of IMF.

This is given that an exception can be made as she will turn 66 this month, surpassing the IMF's age limit of 65 for the post.

'WILL NOT GIVE UP'

One of them was when she became EU commissioner for aid and crisis management in 2010.

She was little known then, but eagerly donning rubber boots or a bullet-proof vest, she soon became a popular figure for her pleasant efficiency and get-stuck-in approach. 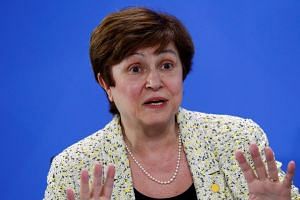 Standing out among the often grey Brussels bureaucrats, Ms Georgieva was not afraid to show emotion as she battled for funds, visited global hotspots and oversaw the EU's huge aid operations.

In 2014 she became European Commission vice-president for budget and human resources.

"She is tenacious and will not give up when fighting for an issue she really cares about," said one Brussels diplomat.

Ms Georgieva is also known for her ability to persuade and get consensus.

In 2016, she was a surprise finalist in the election to the UN secretary-general's post, which in the end went to Portugal's Antonio Guterres.

'LIFE OF THE PARTY'

Ms Georgieva was born on August 13, 1953, the year Soviet leaderJoseph Stalin died, behind the Iron Curtain in Sofia, capital of communist Bulgaria.

Her father Ivan was a road construction technician and mother Minka worked as a shop manager, ignoring her husband's advice not to work because of a heart condition.

Her mother, who died in 2014 aged 93, told local media that as a child her daughter was "far too quiet" and always had her nose in a book from the moment she could read.

She came out of her shell later though. A university classmate, Mr Borislav Borisov, said Ms Georgieva was "the life and soul of the party, playing the guitar.. everyone's favourite."

"She does not burn bridges, she builds them. A real diplomat," he said.

After a PhD in economic science, Ms Georgieva did stints at the London School of Economics, the Massachusetts Institute of Technology and Harvard Business School, as well as teaching in Fiji and Australia.

She has written more than 100 publications on environmental and economic policy topics, including a textbook on microeconomics, and spent almost two decades at the World Bank.

There she rose up the ranks and held a number of senior positions including vice-president. She was also World Bank director for Russia, based in Moscow, in 2004.

This helped the married mother-of-one improve her Russian, in which she is fluent along with English.