BRUSSELS • Europe froze air and rail links to Brussels yesterday as the authorities tightened security in alarm over a series of deadly bomb blasts that ripped through the Belgian capital's airport and a city centre metro station.

As passengers fled the smoking airport and the bomb-hit Maalbeek metro station, the authorities yesterday shut down the airport, metro system, buses, trams and all three main long-distance railway stations in the capital.

"Our whole network is closed at the moment," Brussels public transport operator STIB warned people on Twitter, confirming the shutdown of the metro, bus and tram systems. 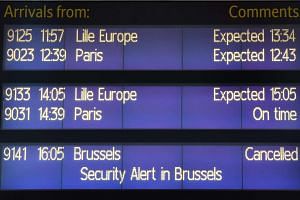 The shutdown hit hundreds of flights scheduled to arrive at and depart from the airport, halting more than 400 arrivals from across Europe and other international airports, including New York and Dakar.

"All flights cancelled at #brusselsairport for the rest of the day. Avoid the surroundings of the airport," the airport said on Twitter.

There are no direct flights from Singapore to Brussels.

The effects of the Brussels airport and train station closures rippled across Europe.

Major stations in Paris remained open but many police officers were seen patrolling in the city's Gare du Nord, from where Eurostar operates trains to London and Brussels.

Eurostar said all trains to and from Brussels had been halted.

"Following the incident in Brussels today we can confirm that Eurostar services are currently suspended on the Brussels route. Public transport in and around Brussels is also severely disrupted," Eurostar said in a statement.

European high-speed train service Thalys said all its traffic, too, had been stopped.

The Netherlands' anti-terrorism coordinating agency NCTV said it was raising airport security and tightening controls at its southern border which it shares with Belgium.

The London Gatwick, Frankfurt and Moscow airports, as well as those in Denmark, Sweden and Finland, have also raised security.

The Danish authorities have been on high alert since two people were killed in shooting attacks on a free speech event and a synagogue in Copenhagen in February last year.