BRUSSELS (AFP) - EU nations will give an additional billion euros (S$1.6 billion) to UN agencies dealing with the refugee crisis, according to a draft statement from an emergency summit on Wednesday.

The leaders said they would “respond to the urgent needs of refugees in the region by helping the United Nations High Commissioner for Refugees, the World Food Programme and other agencies with at least an additional 1 billion euro,” said the draft obtained by AFP.

In his invitation letter to the summit, EU President Donald Tusk said the issue “could not wait” and appealed to countries to make pledges immediately. 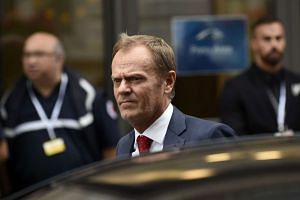 EU urged to secure borders from 'millions' of migrants

“The World Food Programme needed money to provide food to 11 million people in Syria and in the region. The WFP has already substantially cut food support to refugees,” Tusk wrote.

British Prime Minister David Cameron said as he arrived at the summit that his country would give 40 million pounds (S$80 million) to the WFP “because we must make sure people in refugee camps are properly fed and looked after.”

He said that could “stop them from thinking of making this very difficult and dangerous journey to Europe.”

German Chancellor Angela Merkel said on her way into the summit that the EU had to tackle problems including “combatting hunger in the refugee camps. Germany will play its part.”