BRUSSELS • The European Union unveiled its long-term vision on combating climate change in a push for more ambitious action on the environment, just days after US President Donald Trump rejected his government's warning on the economic costs of global warming.

The 28-nation bloc, responsible for 10 per cent of global greenhouse gas emissions, set a 2050 perspective to help give direction to member states, companies and citizens to anticipate costs in fighting temperature increases.

The EU's updated strategy comes before representatives from almost 200 countries are due to meet in Poland next week for an annual conference on tackling climate change.

"With this plan, Europe will be the world's first major economy to go for net-zero emissions by 2050," EU Climate and Energy Commissioner Miguel Arias Canete said. "It is necessary to meet the long-term temperature goals of the Paris Agreement. It is possible with current technologies and those close to deployment," he said.

While the new European strategy does not propose changing the bloc's 2030 goal, it sets seven building blocks for the following decades that could be turned into binding targets later on. These range from energy efficiency measures, including developing zero-emission buildings and smart infrastructures to greater use of renewable energy sources.

"Going carbon-neutral will spur investments in European clean-energy solutions of up to almost €300 billion (S$466 billion) a year," Mr Arias Canete said. "And overall, it will help grow our economy up to 2 per cent of GDP by 2050."

The steps are aimed at showing how determined the EU is to honour the Paris Agreement's targets, even in the face of Mr Trump's decision to take the US out of the 2015 accord signed by almost all other countries in the world. 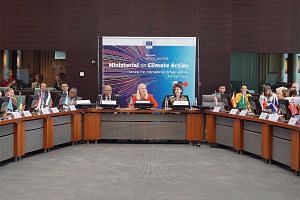 The EU currently has a binding target of cutting emissions by at least 40 per cent by the end of the next decade. That is not enough to meet the Paris objective of keeping global temperature growth well below 2 deg C, a move scientists say is needed to prevent the catastrophic effects of global warming.

"There are many challenges on the road. But with climate change, business as usual is not an option, and we cannot afford the price of inaction," Mr Arias Canete said. "Going climate-neutral is necessary, possible and in Europe's interest."

A version of this article appeared in the print edition of The Straits Times on November 29, 2018, with the headline 'EU sets out plan to cut emissions to zero by 2050'. Subscribe
Topics:
More
Whatsapp Linkedin FB Messenger Telegram Reddit WeChat Pinterest Print Copy permalink