It will also try to stem US assault on multilateral system by shoring up WTO, but expert calls attempt 'a long shot'

GENEVA • The European Union's trade chief heads to New York this week to continue negotiations with the US and Japan, as the three parties seek a way to end what they see as China's unfair commercial policies and dial down global tensions.

Their plan is to create an agreement to try and force China to end "non market-oriented policies" that lead to overcapacity, create unfair competitive conditions and hinder technological development. The stakes could not be higher.

The EU is engaged in a balancing act, working with the US to address common complaints while trying to convince President Donald Trump to roll back unilateral tariffs imposed on the 28-country bloc this year and persuade him against installing other, more punitive measures.

EU trade negotiator Cecilia Malmstrom will also seek to stem the American assault on the multilateral system by shoring up the World Trade Organisation (WTO).

"It's a long shot, and these talks are at a very early stage," said Mr Chad Bown, a senior fellow at the Washington-based Peterson Institute for International Economics. "But this may be the best way both to resolve Trump's escalating trade war with China and to address some of the WTO's key shortcomings."

The meeting comes after Mr Trump has already hit China with tariffs on US$50 billion (S$68.2 billion) of its imports, announced duties on another US$200 billion of goods coming from the nation that go into effect today, and threatened levies on another US$267 billion if China retaliates - which Beijing has already pledged to do. China cancelled trade talks that had been planned between the two nations. 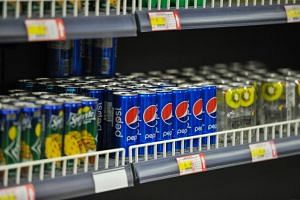 Overall manufacturing in the euro area grew at the slowest pace in two years this month as the economy feels the pain from the global trade war. The auto industry is taking the brunt of the slowdown in demand, according to IHS Markit's latest monthly survey.

"If this initiative succeeds, it could provide an 'off-ramp' from the current" tariff escalation, said Mr Scott Miller, a senior adviser at the Washington-based Centre for Strategic and International Studies. "That's good, since US-China bilateral talks seem not to be making progress."

Though US Commerce Secretary Wilbur Ross said his agency would hold off on any new auto tariffs while the EU and the US negotiate a new trade pact, major car exporters fear Mr Trump could still forge ahead with duties if he believes progress is lacking.

A version of this article appeared in the print edition of The Straits Times on September 24, 2018, with the headline 'EU seeks plan with US, Japan to tackle trade issues with China'. Subscribe
Topics:
More
Whatsapp Linkedin FB Messenger Telegram Reddit WeChat Pinterest Print Copy permalink