BERLIN (AFP) - The European Union border force Frontex has allegedly been turning a blind eye to ill treatment of refugees by guards at EU external borders, according to media reports Monday (Aug 5).

Citing internal documents, the report said Frontex had allowed guards to use dogs to hunt down migrants, as well as to deploy pepper spray and batons, particularly along EU borders in Bulgaria, Hungary and Greece.

The investigation accused local guards of using force or threats to return migrants back across the EU's external borders, thus obstructing the basic right to seek asylum.

It also cited cases of minors being deported on planes unaccompanied and of refugees sedated with medication during their expulsion flights, in violation of international regulations.

According to the investigation, some internal Frontex reports describe "excessive use of force" or "mistreatment of refugees" but often end with the statement "case closed".

Frontex can remove its staff from countries along the EU borders and by not doing so is complicit in any wrongdoing, the head of the agency's Advisory Forum, Stephan Kessler, told ARD. 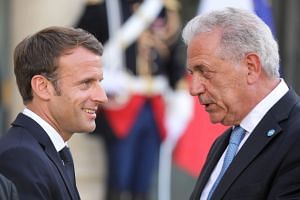 Eurosceptic and populist forces in the European Union

When contacted by AFP, Frontex said "so far, no complaint has been filed against any Frontex officer".

The agency added it would "take action as soon as we have been informed" of any incident.

"All officers deployed by Frontex are bound by the code of conduct which Frontex developed after consultation with a number of partners," it said.

Frontex pointed out that while it can suspend officers on its operations, it has neither "the authority over national border police forces" nor "the power to conduct investigations" on the territory of EU member states.

In Brussels, the European Commission said it is "always concerned about reports of the mistreatment of migrants".

Spokeswoman Mina Andreeva said they will "follow up" the allegations with Frontex "to determine" if they are true and act accordingly.

"Any form of violence and ill-treatment against migrants and refugees is unacceptable", added Andreeva.

After the 2015 refugee crisis saw hundreds of thousand of migrants arrive in Europe, Frontex had its mission enlarged and its funding increased as the European Border and Coast Guard Agency.

According to its website, Frontex has around 700 employees from 29 countries with plans to have 1,000 staff working at its headquarters by 2021.