PARIS - Pro-European Union centrist Emmanuel Macron takes on far-right candidate Marine Le Pen in the second-round run-off of France's presidential election on Sunday (May 7). Here is a primer on the vote.

Why is it important?

France is the eurozone's second-biggest economy as well as a global military and diplomatic heavyweight, with veto power as a permanent member of the United Nations Security Council.

The second round has boiled down to a battle between the pro-European, pro-globalisation vision of Macron and Le Pen's hostility to the EU and Nato.

If Le Pen wins, it would further shake up the West's postwar order, already rattled by Britain's vote to leave the EU and Donald Trump's election to the White House. 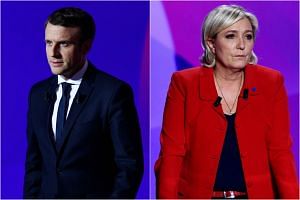 French presidential election: What you need to know about Emmanuel Macron and Marine Le Pen

How is the president elected?

The president is elected in a direct popular vote of one or two rounds.

Sunday's run-off comes after neither candidate obtained an absolute majority in the first round. Every French presidential election since 1965 has gone to a second round.

What happened in the first round?

Macron won 24 per cent of the vote and Le Pen finished second with 21.3 per cent as France's traditional left and right parties were eliminated in the first round for the first time since the start of the Fifth Republic in 1958.

The former investment banker and former economy minister is the youngest candidate and the only one with no experience in running a campaign. But Macron has emerged as a favourite to win the election. The latest surveys show him winning against Le Pen with about 62 per cent of the vote.

After leaving Rothschild, Macron joined President Francois Hollande's government in 2012 and it was not long before he became economy minister. But he resigned in August 2016, criticising sacred cows of the "social model" such as the 35-hour working week, iron-clad job protection and jobs-for-life in the civil service. These are messages that have made him one of France's most popular politicians, a big achievement for an ex-banker in a country where many disdain the world of high finance, though he remains mistrusted by many on the traditional left.

Macron setup the "En Marche!" or "Onwards!" political movement in April and many critics saw him as, at best, a shooting star of limited life span. But with the Socialists in disarray and the centre-right's candidate Francois Fillon mired in a financial scandal, Macron soon emerged in pole position.

Tapping into disenchantment with the status quo, Macron has vowed to shake up the establishment. "France is blocked by the self-serving tendencies of its elite," he once told supporters at a rally in Pau town. "And I'll tell you a little secret: I know it, I was part of it."

Macron is seen as having the best political programme, according to a snap survey. He aims to end nepotism and conflict of interests in politics and modernise the economy, as he seeks to counter criticism that he and his political party are not ready to govern. He also advocates market-oriented economic reforms and wants to renegotiate European Union's treaties, including the one that keeps France in the euro.

He has confounded opponents by building up huge grassroots support and winning endorsements from defecting centre-left and centre-right politicians.

Macron is married to his former teacher Brigitte Trogneux who is 24 years older than him. He has known her since he was 16 years old. Given the big age gap, their marriage has been the stuff of intensive coverage by glossy boulevard magazines. In February, he publicly dismissed rumours that he had a gay relationship outside his marriage.

If elected, Macron will be the youngest French president since Napoleon.

She entered politics when she was 18 by joining the National Front founded by her father, ex-paratrooper Jean-Marie Le Pen. In 1998, she abandoned her law career to provide legal advice to the party and was first elected to political office in 1998 as a regional councillor in northern France. She later had the same role in the Paris region before returning to the northern rust belt in 2010. She has also been a member of the European Parliament since 2004.

Living and breathing politics from her youngest years, Le Pen has said her childhood was deeply marked by the explosion of a bomb that destroyed the family apartment when she was eight years old in an incident that remains unsolved.

She has brought the FN from fringe status into the political spotlight and made herself a real contender to be France's first woman president and its first far-right leader since World War Two. Since taking the helm in 2011, she has sought to rid the party of the anti-semitic image it acquired under the nearly 40-year leadership of her father. The twice-divorced mother of three has positioned the party as an anti-immigrant, Eurosceptic force offering protectionist policies to shelter French workers from globalisation.

While Le Pen was one of the favourites to get through the first round, polls released on Friday forecast a defeat for her at the May 7 runoff. The polls now expect her to secure about 38 per cent of the votes on Sunday, behind Macron's 62 per cent.

With her trademark gravelly voice, Le Pen never hesitates to lock horns with journalists or rivals on televised debates as she takes on the political establishment. Her plans to ditch the euro and force the French central bank to fund state spending remain deeply unorthodox, although she says her economic policies are more in tune with the anti-globalisation sentiment that propelled President Donald Trump to the White House and fuelled Britain's Brexit vote last year.

Le Pen has tried to pursue a softer image even at the expense of her relationship with her father, disowning his comments that Nazi gas chambers were a "detail" of history. She had him expelled from the party over his views in 2015. But she too has shown she can touch a raw nerve, provoking outrage last month when she denied the French state's responsibility in the German-ordered roundup of 13,000 Jews by French police in Paris during World War Two.

Le Pen is also under investigation over the alleged misuse of EU funds to pay party assistants and for tweeting pictures of violence by the Islamic State in Iraq and Syria (ISIS).

How does the election work?

A total of 47.58 million people are registered to vote. The country's 66,546 polling stations will open at 8am (2pm Singapore) and most will close at 7pm, while those in Paris and other big cities will remain open an hour longer.

The first estimated results could come as early as 7.45pm (1.45am Singapore on Monday).

The new president will take over from Socialist Francois Hollande and is expected to be sworn in by May 14.