MOSCOW • Russia sent its most high-tech air defence system to Syria yesterday to protect its jets operating there, but ruled out military retaliation against Turkey after it shot down a Russian fighter jet on the Syrian border.

The downing of the jet on Tuesday was one of the most serious publicly acknowledged clashes between a Nato member and Russia for half a century, and further complicated international efforts to battle Islamic State in Iraq and Syria militants in Syria.

Russian officials expressed fury over Turkey's actions and spoke of retaliatory measures, but their response was carefully calibrated.

"We do not plan to go to war with Turkey, our attitude towards the Turkish people has not changed," Russian Foreign Minister Sergei Lavrov said yesterday after speaking to his Turkish counterpart Mevlut Cavusoglu by phone in the first contact between the two sides after the plane went down. 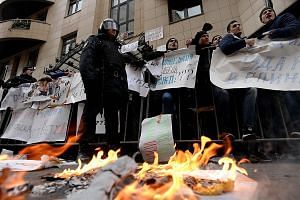 Mr Lavrov, however, warned that Moscow would "seriously re-evaluate" relations with Ankara, while Kremlin pledged that its air force would keep flying missions near Turkish air space.

Turkish President Tayyip Erdogan said Ankara had no intention of escalating tensions with Russia and that Turkey was simply defending its border.

Speaking on a trip to the city of Nizhny Tagil, Russian President Vladimir Putin ordered the sending of the advanced weapons system to Russia's Khmeimim air base in Syria's Latakia province.

The dispatch of the weapons, which officials later said would be the S-400 missile system, is likely to be viewed as a stark warning to Turkey not to try to shoot down any more Russian planes.

The Russian Su-24 jet downed on Tuesday was hit by missile fire from Turkish aircraft as it flew a mission over Syria near the Turkish border, where the Russian air force has been bombing rebel targets. Turkey said the jet had encroached on Turkish air space and was warned repeatedly to change course, but Russian officials said it was at no time over Turkey.

After an emergency meeting of all 28 Nato members on Tuesday, Nato chief Jens Stoltenberg said that the military alliance stands by key ally Turkey but he urged both sides to try to resolve the crisis.