NEVERS, France (AFP) - The trial of a Dutch man dubbed the "dentist of horror" after allegedly mutilating the mouths of more than 100 patients in France was scheduled to open on Tuesday.

He is charged with aggravated assault as well as fraud over claims that he tried to rip off patients and insurance companies, and faces up to 10 years in prison and a 150,000 euro ((S$227,792) fine if found guilty. 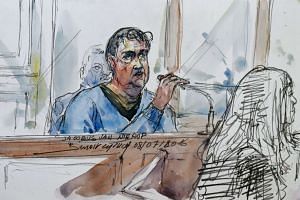 Van Nierop, who went by the first name of Mark, was hired by a head-hunter in 2008 and was initially welcomed by locals in the rural area of Chateau-Chinon, who were sorely lacking in medical services.

Sylviane Boulesteix, 65, visited the dentist in March 2012 to have braces fitted.

"He gave me seven or eight injections, and pulled out eight teeth in one go. I was gushing blood for three days," she said.

An 80-year-old, Bernard Hugon, said the dentist left "pieces of flesh hanging everywhere" after tearing out a tooth.

"Every time, he would give us what he called 'a little prick' and we were asleep, knocked out," said Nicole Martin, a retired teacher who lost several teeth to abscesses caused by the horrific operations.

"When it was over, we would find a Post-it note saying to come back for an appointment the next day or the day after," she added.

Martin set up a victims' group in early 2013 to press charges, and it soon swelled to 120 members.

In June of that year, police arrested Van Nierop but left him free pending trial, and he fled the country the following December. He was eventually tracked down to a small Canadian town in New Brunswick and arrested under an international warrant in September 2014.

Local media reported that he tried to slit his throat when police arrested him.

Van Nierop tried to block his extradition, first to the Netherlands and then France, claiming to suffer from "psychological problems" including gender identity issues and suicidal tendencies. But he was eventually placed in a prison psychiatric unit in the Loiret department, south of Paris.

"He claimed to have killed his first wife, he played crazy, he said he was trans-sexual. He tried everything" to avoid extradition, Martin said.

According to Dutch media, Van Nierop had already come under investigation at home over his working practices before coming to France.

The trial in Nevers is due to last until March 18.