COPENHAGEN (REUTERS) - Danish police said on Saturday (Sept 29) they had questioned and later released two suspects who were found travelling in the Swedish-registered black Volvo that sparked a major crime search on Friday.

Police briefly shut bridges and ferry links to Sweden and Germany as they hunted for the car, which Sweden's Aftonbladet newspaper said was wanted in connection with a kidnapping.

The two suspects, who police said were thought to be linked to a "serious crime," were later freed.

The pair were detained after being seen acting suspiciously near the scene of the potential attack.

The investigation continues, police said, but gave no further details.

"The Volvo was located nearby, and its behaviour close to the people under threat... indicated that an attack was about to happen," chief police inspector Jorgen Bergen Skov said at a press briefing in Copenhagen.

Friday's search, in which the country's armed forces also took part, briefly shut the Oresund bridge and tunnel, a near 16km road and rail link with Sweden. 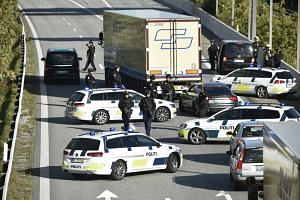 "We were acting in case of a worst-case scenario," Skov said about Friday's comprehensive police operation.