LONDON (BLOOMBERG) - Carbon emissions from fossil-fuel use hit a record last year after energy demand grew at its fastest pace in a decade, reflecting higher oil consumption in the US and more coal burning in China and India.

Those findings from the International Energy Agency (IEA) mark a setback for the effort to rein in the pollution blamed for global warming just three years after a landmark deal in Paris where all nations committed to cut emissions.

The figures showed that natural gas is becoming a preferred fuel for factories and utilities while the pace of installing renewable forms of energy is lagging.

The report also indicated the strength of the global economic expansion last year, with gains in electricity consumption and more notably in the US.

"We have seen spectacular growth of the economy in the US," said Mr Fatih Birol, executive director of the Paris-based institution advising nations on energy policy. "We have seen several new petrochemical projects coming online."

Energy demand grew 2.3 per cent last year, the most in a decade, according to the IEA. It showed a record 33 gigatons of carbon emissions from energy, up 1.7 per cent from the previous year. Global electricity demand rose 4 per cent and was responsible for half the growth in overall energy demand.

Global coal demand grew for the second consecutive year in 2018, driven by Asia's appetite for the dirtiest fossil fuel. Even as coal's share of the global energy mix declined, it remains the world's largest source of electricity. Natural gas use rose 4.6 per cent, its fastest growth since 2010. 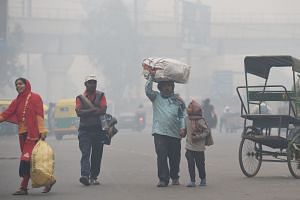 We need to start taking care of the earth

The US increased its use of oil products at a faster rate than any other country for the first time in 20 years, overtaking China.

The US boosted oil use by 540,000 barrels a day, a fifth more than China even though the Asian nation has four times the population and is moving toward a less oil-intensive model in order to improve its urban air quality.

"European oil demand remained stagnant on slowing economic activity and rising prices," the IEA said in its report. "Germany saw an important decline in oil demand," which fell 5.4 per cent in 2018.

Global output of greenhouse gases from energy-related sources rose to a record as energy demand jumped at its fastest pace in a decade.

"Renewables growth is not keeping pace with the electrification of our society," Mr Birol said on a call with reporters. "We need to see more support for renewables."

Global energy-related emissions hit an all-time high in 2018 of 33 billion tons of carbon dioxide, a growth rate of 1.7 per cent, which represents the fastest increase since 2013. Coal-fired power plants, which are closing across western Europe, were the single largest contributor to the growth in emissions, accounting for 30 per cent of the increase, the IEA said.

Emissions are still increasing in China and India. The US saw an increase of emissions after they fell in 2017. Germany, Japan, Mexico, France and the UK all saw declining output.

The world needs to cut the use of coal-fired power to almost nothing by 2050 to get anywhere close to limiting global warming to 1.5 deg C, a panel of United Nations scientists said in a report last year.