He is the first Chinese head of state to visit UK in a decade; $43b worth of deals likely

Mr Xi is the first Chinese head of state to visit Britain in 10 years and both sides say it heralds a "golden era" in relations.

Prince Charles and his wife Camilla officially kicked off the visit when they picked up the President and his wife Peng Liyuan at the Mandarin Oriental Hotel for the ceremony at Horse Guards Parade.

The Queen, the Duke of Edinburgh and British Prime Minister David Cameron formally welcomed the Chinese leader as a 41-gun salute rang out. 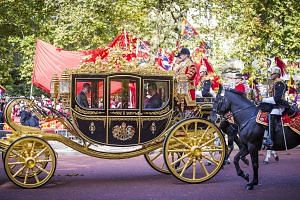 Mr Xi then joined the Queen and the duke in a gilded horse-drawn carriage for a procession along The Mall, one of London's most famous avenues, to Buckingham Palace, where they had a private lunch.

A small but noisy group of human rights and pro-Tibet protesters chanted and waved banners but they were hugely outnumbered by thousands of spectators cheering and waving Chinese flags.

The protesters - including backers of Falungong, the spiritual sect banned as a cult in China - were kept well back from the processional route by a large police presence.

Mr Cameron has heralded the President's visit as "a very important moment for British-Chinese relations" but promised to address the protesters' concerns.

His spokesman told reporters on Monday that "nothing is off the table" and insisted that he would raise human rights with Mr Xi.

But it is highly unlikely Mr Xi will face public criticism over human rights from British officials. The British government has made it clear that Britain's relationship with China is foremost about markets and trade and quiet diplomacy.

One deal expected to be signed is a plan for two state-owned Chinese utilities to invest in a nuclear power project being built by French utility EDF in south-west England.

On the eve of the trip, Mr Xi had heaped praise on Britain for what he called a "visionary and strategic choice" to strengthen commercial ties - a marked change in tone since Mr Cameron angered Beijing in 2012 by meeting the Dalai Lama.

Mr Xi was scheduled to deliver an address to Parliament yesterday and attend a state banquet hosted by the Queen in the evening.

Mr Cameron and Mr Xi will hold talks today on energy and trade.