ROME (REUTERS) - A Malta-based humanitarian group that has been rescuing migrants in the Mediterranean for three years said on Monday (Sept 4) it was suspending operations after months of rising tensions with Italian and Libyan authorities.

The Migrant Offshore Aid Station (MOAS) was instead sending its rescue ship, Phoenix, to the Bay of Bengal to take aid to Rohingya Muslims who have fled violence in Myanmar for Bangladesh, co-founder Regina Catrambone told Reuters by telephone.

MOAS is the fourth group to stop patrols for migrants trying the deadly Mediterranean crossing in the past month.

Last month, Doctors Without Borders - or Medecins sans Frontieres - followed by Save the Children and Germany's Sea Eye all suspended operations. They said their crews could no longer work safely because of the hostile stance of the Libyan authorities.

That leaves Proactiva Open Arms, Sea Watch and SOS Mediterranee still running rescue operations. On Monday, the Aquarius, operated by SOS Mediterranee with Medecins sans Frontieres medical staff, was the only rescue ship in the Mediterranean.

Catrambone said MOAS does not want to risk having to take migrants back to Libya, where they are locked up for months or even years in overcrowded warehouses with little food, no healthcare and no idea of when they will be freed.

"It's all too confused right now, and this confusion is not good for those people who pay the price with their lives," she said. "We no longer have a definite knowledge that they will be taken to a safe port, and we don't want to rescue migrants and then be forced to return them to Libya, giving them a false hope." 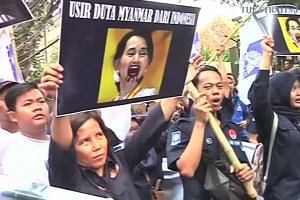 Since 2014, MOAS has rescued or assisted 40,000 migrants in the Mediterranean. In August, MOAS for the first time conducted a rescue at the orders of the Libyan Coast Guard, but in that case the migrants were brought to Italy.

Since Libyan strong man Muammar Gaddafi was ousted in 2011, Libya's Coast Guard vessels have fallen into disrepair, forcing Italy to take over rescue operations off the North African coast. Since 2014, some 600,000 boat migrants have reached Italy.

But Italy and the European Union are training and funding the Libyan Coast Guard, and Rome now has a naval vessel in Tripoli's port repairing their ships.

Last month, a Libyan Coast Guard vessel intercepted a charity ship and ordered it to sail to Tripoli or risk being fired on - the latest in a series of tense encounters on the high seas.

Since July, there has been a sharp drop in departures from the Libyan coast, in part because of a shift in strategy of militias that control the region around Sabratha, the main point of departure for migrant boats for the past two years .

Some 15,373 migrants arrived in Italy by boat in July and August, compared with 44,846 in the same period last year.

This year, NGOs have also faced accusations in Sicily that they were colluding with people smugglers, fuelling a political firestorm over Italy's immigration policy before a national election early next year.

Some 13,000 migrants have died in the central Mediterranean since 2014 trying to make the crossing, including more than 2,200 this year, the International Organisation for Migration estimates.